Australia has made a last-minute plea for a stay in the imminent execution of two Australian drug traffickers in Indonesia, saying that reports their trial had been tainted by corruption needed to be investigated.

Foreign Minister Julie Bishop said the allegations that judges requested money to commute the death sentences for the pair were "very serious".

She called into question the integrity of the sentencing process.

Indonesia's foreign ministry hit back, saying Australia needed to show proof of alleged corruption and questioned why concerns were only being raised now instead of ten years ago.

Armanatha Nasir, spokesman for Indonesia's foreign ministry, said Australians Myuran Sukumaran and Andrew Chan have been given all the legal avenues to challenge their death sentences.

The two are among nine drug convicts, including others from Brazil and Nigeria, due to be executed by firing squad as soon as tomorrow night.

Bali-based lawyer Muhammad Rifan told the Sydney Morning Herald that he had agreed to pay judges in the cases of Chan and Sukumaran more than A$130,000 to give them a prison term of less than 20 years.

Mr Rifan said the deal fell through when the judges told him they had been ordered by senior legal and government members in Jakarta to impose a death penalty and he did not have enough money to meet a revised, higher demand for a lighter sentence.

"It's a matter for Indonesia's Judicial Commission to investigate these matters and that underlines why we continue to request Indonesia to allow the judicial commission to finalise its review," Ms Bishop said.

"An execution is an irrevocable step and I believe that these hearings and these appeal processes should be concluded before any decision is taken."

Indonesia's Judicial Commission said it would look into reports alleging corruption but said its findings would have no bearing on their cases.

Indonesia informed the two Australians at the weekend they would be executed in a matter of days.

Ms Bishop criticised Indonesia over its insensitive handling of the announcement on a day when Australians remember their war dead on ANZAC Day that marks the start of a doomed World War I campaign in Turkey.

"We did make representations to request that they not do this on our national day of remembrance, but they proceeded with the meeting in any event," she said. "I'm very disappointed that it proceeded in this way."

Ms Bishop said it was not too late for President Joko Widodo to stay the executions.

"Again, I respectfully call on President Widodo to reconsider his refusal to grant clemency," Ms Bishop said. "It is not too late for a change of heart."

Indonesia has harsh punishments for drug crimes and resumed executions in 2013 after a five-year gap. Six executions have been carried out so far this year.

Australia is continuing to lobby on behalf of Chan and Sukumaran, the ringleaders of the so-called Bali Nine, who were arrested at the main airport on the holiday island of Bali in 2005 for trying to smuggle 8kg of heroin to Australia.

The other members of the gang, all Australians, have been jailed for between 18 years and life in Indonesia.

French President Francois Hollande and his Australian counterpart Tony Abbott both reiterated their opposition to the death penalty "in all cases".

"France and Australia share the same attachment to human rights and condemn the death penalty in all places and all circumstances," the French presidency said in a statement after a meeting between the two leaders.

Indonesian President Joko Widodo is "sympathetic" about the plight of a Filipina facing death for drug trafficking and has promised to look into her case, a spokesman for Philippine President Benigno Aquino said after he made a personal appeal.

Mary Jane Veloso, a 30-year-old single mother of two boys, is due to face an Indonesian firing squad tomorrow.

She was arrested in 2009 with 2.6kg of heroin sewn into the lining of her suitcase.

She insists she went to Indonesia for a job as a maid and was duped by an international drug syndicate.

Mr Aquino made his appeal in person on the sidelines of the annual summit of the Association of Southeast Asian Nations (ASEAN) in Malaysia, his spokesman said.

The spokesman said Mr Widodo promised to discuss the issue again later today at the summit. 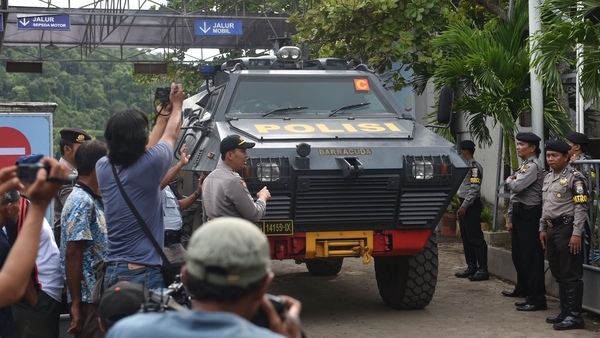