The search zone for missing Malaysia Airlines flight MH370 will be doubled if nothing is found in the huge undersea area now being scanned for wreckage.

The news came in a joint statement from government officials in Malaysia, Australia and China.

They said the Indian Ocean search zone would be expanded to 46,300 square miles (120,000 square kilometres) if the current area comes up empty.

The plane went missing en route from Kuala Lumpur to Beijing on 8 March last year with 239 people on board.

A major search operation has been conducted in the southern Indian Ocean, but no trace of the Boeing 777 has been found.

About 60% of an initial suspected crash area, which has been determined by satellite signals indicating the plane went down in the southern Indian Ocean, has already been searched in the Australian-led, high-tech effort to scan a deep sea floor.

The three officials said that searching the new area could drag the effort out for another year due to the difficulties faced by the operation in the remote and storm-tossed seas.

Mr Truss said it would take "at least the rest of this year".

"As the new search area surrounds the old one, you can assume the seabed is broadly similar," he said.

Weather, the extreme depths being searched, and the rugged nature of the underwater territory in the zone about 1,000 miles (1,600 kilometres) off Australia's west coast have made for a slow, frustrating search.

Australian authorities had earlier said the current search was expected to be completed in May.

Angry relatives, who have accused Malaysia of bungling its initial response and being slow to share information, have issued emotional pleas for authorities to continue searching even if no debris is found in the current area.

Mr Truss said Australia and Malaysia would continue to share the costs of the expensive search.

"Both our governments are committed to making sure we can do this job properly," he said.

"We have the best equipment in the world and we are satisfied the search is being conducted in a very professional way."

The meeting also discussed possible next steps if wreckage is found so that a recovery operation can quickly swing into action. 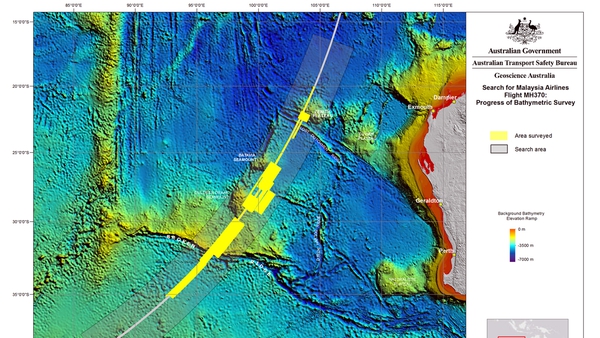