End-of-flight scenarios have indicated it may have spiralled into the Indian Ocean.

Seven months after the Boeing jet disappeared with 239 people onboard, the Australian Transport Safety Bureau, which is leading the hunt for the jet, said ongoing analysis had helped refine the zone where an underwater search began this week.

"The latest analyses indicates that the underwater search should be prioritised further south within the wide search area for the next phase of the search," it said.

Despite an extensive hunt for the plane, which was en route from Kuala Lumpur to Beijing when it mysteriously turned southwards on 8 March, no sign of it has been found.

Aviation experts had little to go on besides the satellite communications from the plane, information they have used to pinpoint a search area in the vast ocean off Western Australia.

They believe the best hope of finding the plane is within the seventh arc, or the final satellite "handshake" from the plane, estimated to be when it was in descent.

The ATSB said that when all elements of the analysis so far were taken into account, it indicated that the aircraft "may be located within relatively close proximity to the arc", although further south than initially thought.

An ATSB report in June had put the priority search zone above an underwater feature named Broken Ridge, more than 1,100 nautical miles west of Perth.

But the new analysis puts it south of this feature, confirming earlier suggestions.

Analysis of the satellite data and end-of-flight simulations was ongoing, and this work could result in further changes to where the search was conducted, the ATSB added.

"The simulator activities involved fuel exhaustion of the right engine followed by flameout of the left engine with no control inputs," it said in an update on the flight path analysis.

The analysis of communications and flight data has been used to determine the first underwater areas to be scoured, with the first ship starting its scan of the ocean depths this week.

The Malaysia contracted GO Phoenix is using sophisticated sonar technology experts hope will detect large pieces of debris such as an engines or fuselage.

It will be joined two other ships in the weeks ahead. 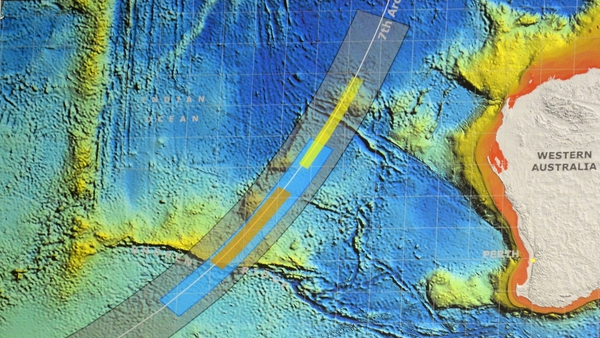