Dunnes Stores workers belonging to the Mandate trade union are to escalate their dispute over low-hour contracts and union negotiating rights.

The move was decided at a meeting of the union's National Disputes Committee today, but a date has not yet been set for further industrial action.

Assistant General Secretary Gerry Light said members were angry that the retailer had not yet come to the table, adding that they were now determined to escalate their campaign.

He said in the next two weeks a mass meeting of around 100 shop stewards will fix a date for further industrial action.

They will also discuss holding a public event, such as a march or a protest, to highlight their campaign.

Mandate has said it will be taking legal advice on proposed new collective bargaining legislation.

It will also look at potentially taking individual cases on behalf of workers allegedly victimised after taking part in the one-day strike on 2 April. 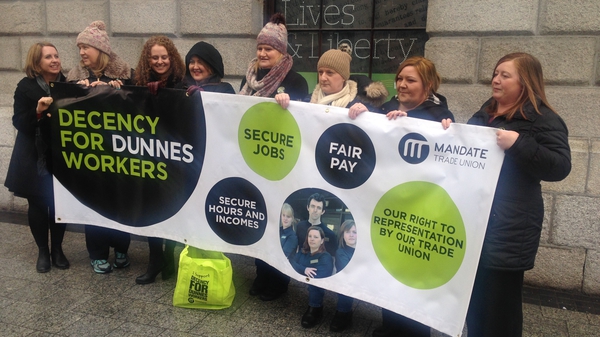