An air corps helicopter is assisting in Co Kerry where a gorse fire is threatening thousands of acres of Killarney National Park.

The fire which is close to Torc Mountain has been burning since last night.

It is now approaching forestry containing oak woods and other native species.

Around 20 firefighters deployed from Killarney and nearby towns Kenmare and Castleisland, have been fighting the gorse fire.

However, management at Kerry Co Council sent a request to the air corps via the Department of Defence for a helicopter to assist in fighting the fire.

The AW139 helicopter is equipped with a basket, which will douse the flames from above, helping fire fighters on the ground below.

The so-called Bambi bucket can hold up to 1,000 litres of water.

The helicopter will fill the Bambi bucket from the nearby lakes, and is expected to conduct several runs.

Yesterday firefighters across Kerry attended the Killarney National Park to tackle a fire that covered over 100 acres of land at the foot of Mangerton Mountain.

Firefighters in Co Clare also attended a fire yesterday on Ben Dash, between Lissycasey and Kilmaley.

The fire burned for nearly 11 hours, making it one of the largest wildfires of the year there. 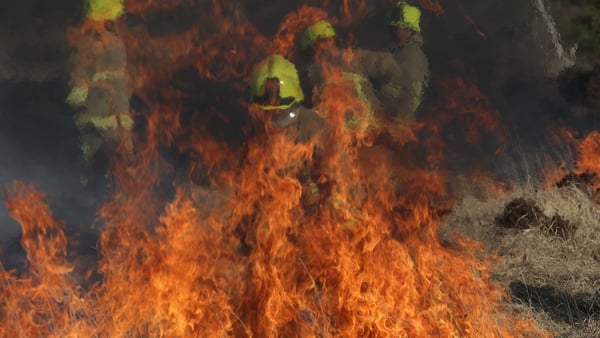 Wildfires extinguished in Kerry and Clare