Tens of thousands took to the streets in towns and cities across France today in union-led protests against public spending cuts that closed down the Eiffel Tower to tourists.

The protests coincide with strikes by air traffic controllers and state radio workers.

The nationwide marches, with the biggest rally in Paris, were a test of how much support unions can muster over spending curbs they say undermine public service and purchasing power to the general detriment of the euro zone's second-largest economy.

One of France's largest trade unions, the pro-reform CFDT , declined to join the movement, arguing that savings being made in France were not on the same scale as the austerity undergone in other euro zone countries such as Spain, Ireland and Greece.

President Francois Hollande's government said it still expected economic growth of just one percent this year and trimmed its forecast for the next two years, underlining the fragility of the recovery.

The Bank of France, however, raised its estimate for first-quarter growth to 0.4% from 0.3%  quarter-on-quarter, citing stronger foreign demand.

Turnout across the country was mixed. In the eastern city of Strasbourg, some 1,000 took to the streets, while demonstrators in the southwest city of Toulouse said they numbered 8,000.

In the southern port of Marseille police said 7,000 joined a rally while organisers said the total was nearer 45,000. In Lyon 4,000 people joined the protest.

Unions said they expected tens of thousands of marchers to join the main rally in Paris by the end of the day. The Eiffel Tower, normally packed with tourists, was shut.

The hardline CGT union said more than 300,000 people demonstrated across France, including 120,000 in Paris. The police estimated the numbers at 32,000 in the capital. 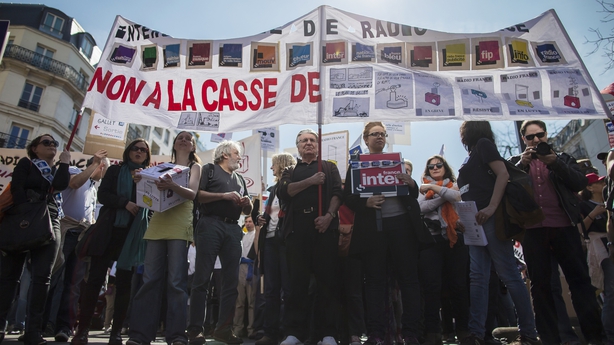 "The government should pay attention to what is happening today. Either it listens or it doesn't - but it shouldn't start complaining afterwards," Jean-Claude Mailly of Force Ouvrie reunion told reporters at the Paris event, warning of further industrial action.

The call for stoppages across the public sector, including by state-employed teachers, coincided with the second day of an air traffic control strike and another day in the longest-ever stoppage over a shake-up at France's public radio network.

Airlines such as Air France, easyJet and Ryanair said they had to cancel hundreds of flights in and out of France, and to some destinations elsewhere in Europe because controllers have struck over plans to change work conditions and raise their retirement age to 59 from 57.

At Radio France, a public-service entity that includes two orchestras as well as a national and local radio network, programming was scaled back as the organisation's industrial dispute entered a fourth week. 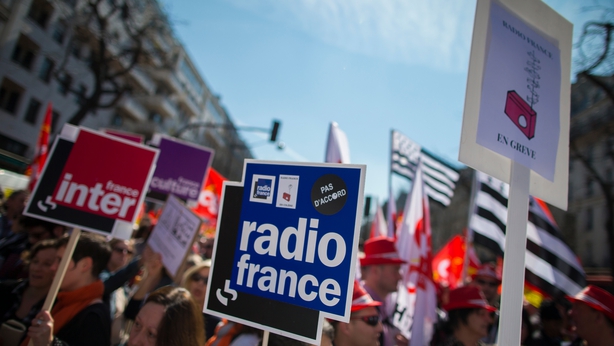 Staff are at loggerheads with Radio France boss Mathieu Gallet, who is under government pressure to pursue money-saving measures without prolonging the dispute.

Some teachers in France's public school system stayed away, but many schools kept their doors open by providing activities in place of teaching for pupils.

President Hollande's government has vowed to cut its deficit toEU-agreed levels by the end of his tenure in 2017. It has said it will shave 50 billion euros ($54 billion) off its spending projections by then, but spending will still rise slightly. 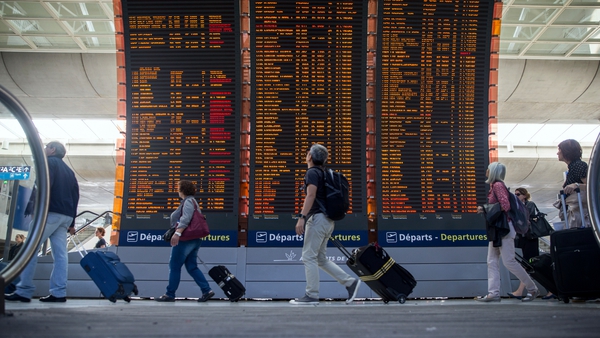