The jury in the trial of the man accused of carrying out the Boston bombings has ended its first day of deliberations without reaching a verdict.

Dzhokhar Tsarnaev faces 30 charges relating to the April 2013 bombings and the events of the following days that saw four people killed and 260 injured.

US attorneys and the 21-year-old's legal team each set out their closing arguments yesterday.

The prosecution labelled Mr Tsarnaev as a terrorist hero, who was blood-thirsty.

They said he and his brother, Tamerlan, had carried out a cold, calculated attack designed to cause as much terror as possible and to punish the US.

The defence conceded that there was no excuse for what their client had done.

However, they said he was only following the misguided beliefs of his elder brother.

Tamerlan Tsarnaev later died during a shootout with police when Dzhokhar drove a car at him.

The trial will begin a second phase if the 21-year-old is convicted of any of the 17 of the 30 offences that carry the death penalty.

The jury would then have to decide whether or not to sentence him to death.

Though the death penalty is unpopular in Boston jurors who serve on federal capital murder trials must express a willingness to impose it.

It took the court 24 days to choose 12 jurors and six alternates who satisfied that condition.

Prosecutors called 92 witnesses over the last month to make the case that Dzhokhar Tsarnaev was an equal partner with his brother in plotting the bombings as vengeance for US military campaigns in Muslim-majority countries.

The defence called just four witnesses, including an FBI photographer who also testified for the prosecution.

Dzhokhar Tsarnaev is also accused of the fatal shooting of Massachusetts of Institute of Technology police officer 26-year-old Sean Collier. 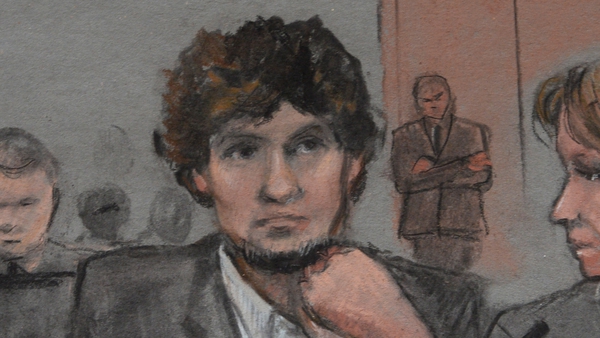