Southern Yemeni militias backed by warplanes from a Saudi-led coalition attacked Houthi fighters across several provinces in south Yemen today, driving the Shia rebel forces from some of their positions, witnesses and militia sources said.

The southern fighters' gains came on the 12th day of an air campaign by Saudi Arabia and mainly Gulf Arab allies trying to stem advances by the Iran-allied Houthis, who control the capital Sanaa and have advanced on the southern city of Aden.

The fighting has killed hundreds of people, cut off water and electricity supplies and led the United Nations children's agency UNICEF to warn that Yemen is heading towards a humanitarian disaster.

Saudi Arabia, the main Sunni Arab power in the Gulf,launched the air campaign on March 26 to try to contain the Shia Houthis and restore President Abd-Rabbu Mansour Hadi,who has fled Aden for refuge in Riyadh.

The International Committee of the Red Cross and UNICEF plan to fly aid planes into Yemen on Tuesday, but the missions have been delayed as they seek clearance from Arab states waging the air strikes and hunt for planes prepared to fly to Yemen.

In Aden, Houthi forces gathered at the edge of the main port area but pulled out of two residential quarters on its fringes, residents told Reuters news agency.

Around 60 people were killed in heavy fighting in the area yesterday.

Military momentum is hard to judge in a disjointed conflict playing out across hundreds of miles of mountains, deserts and coastal positions, but in the southern provinces surrounding Aden the Houthis' foes said they had made gains.

Residents in Dhalea, north of Aden, said air strikes hit a local government compound on the northern edge of the town and a military base on its outskirts, which were both taken over by Houthis. They said buildings were on fire and reported loud explosions.

Southern militias reported cutting off two roads in Abyan province, east of Aden, leading to the port city, after clashes with the Houthis.

Residents near al-Anad air base, once home to US military personnel fighting a covert drone war with al Qaeda in Yemen, said dozens of Houthi and allied fighters were withdrawing north after the site was bombed by coalition jets. 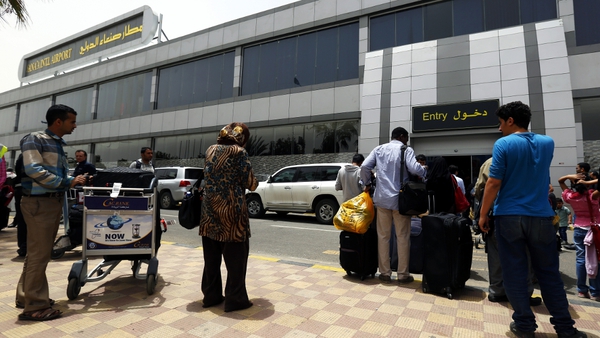