The world's biggest particle collider is back in operation after a two-year upgrade, the European Organisation for Nuclear Research (CERN) said.

All systems would be checked over coming days before the energy of the beams was increased, CERN said in a statement.

"After two years of intense maintenance and several months of preparation for restart, the Large Hadron Collider, the most powerful particle accelerator in the world, is back in operation," CERN said.

"It's fantastic to see it going so well after such a majo roverhaul," CERN Director General Rolf Heuer said as as the beams moved round the tubes of the 27km underground complex.

A short-circuit in one of the LHC's magnet circuits eight days ago had delayed the eagerly-awaited restart.

The LHC comprises a ring-shaped tunnel straddling the Franco-Swiss border, in which two beams of protons are sent in opposite directions.

Powerful magnets bend the beams so that they collide at points around the track where four laboratories have batteries of sensors to monitor the smashups.

The sub-atomic rubble is then scrutinised for novel particles and the forces that hold them together.

In 2012, the LHC discovered the Higgs Boson, the particle that confers mass, earning the Nobel prize for two of the scientists who, back in 1964, had theorised its existence.

The upgrade was intended to beef up its maximum collision capacity from eight teraelectronvolts (TeV) to 14 TeV - seven TeV for each of the two counter-rotating beams.

CERN said earlier that if all went well with the start-up particle collisions "at an energy of 13 TeV" could start as early as June.

During the next phase of the LHC programme, researchers will probe a conceptual frontier called new physics, with enigmatic "dark matter" the big area of interest.

Ordinary, visible matter comprises only about 4% of the known Universe. 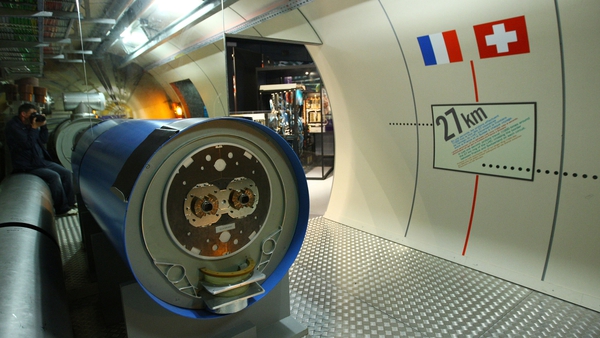 CERN to resume smashing particles in LHC from March