The ICRC has been negotiating for nearly a week to deliver life-saving supplies and equipment to Yemen, where the coalition has conducted 11 days of air strikes against Iran-backed Shia Houthis.

The coalition now controls the country's ports and air space.

"We have received permission from the coalition for two planes now, one carrying supplies and one with staff," ICRC spokeswoman Sitara Jabeen said.

The ICRC hoped that the aircraft could land tomorrow in the capital Sana'a, she said.

However, it was still awaiting approval for an ICRC surgical team it plans to bring by boat into the southern city of Aden, where fighting remains intense.

In Riyadh, a spokesman for the Saudi-led coalition said arrangements had been made for at least one Red Cross aid delivery this morning, but the ICRC had pulled out of the arrangement.

The coalition says it has set up a special coordination body for aid deliveries and asked NGOs and governments to work with it to ensure humanitarian aid can be brought into Yemen and foreign nationals can be evacuated safely.

It has called for a 24-hour humanitarian pause in the conflict to allow aid to reach people cut off by air strikes and to save the lives of "streams of wounded".

Yemen's Houthis are ready to engage in peace talks as long as the Saudi-led air campaign is halted and the negotiations are overseen by "non-aggressive" parties, a senior Houthi member said.

Saleh al-Samad, who was an adviser to President Abd-Rabbu Mansour Hadi, also said that Yemenis reject the return of Mr Hadi, who escaped to Saudi Arabia after Shia Houthi fighters edged closer to his southern base of Aden last month.

UN brokered peace talks in the preceding weeks between Mr Hadi and the Houthis had failed.

"We still stand by our position on dialogue and we demand its continuation despite everything that has happened, on the basis of respect and acknowledging the other," Mr Samad said.

"We have no conditions except a halt to the aggression and sitting on the dialogue table within a specific time period ...and any international or regional parties that have no aggressive positions towards the Yemeni people can oversee the dialogue," Mr Samad said, without specifying who they might be.

He added that he wanted the dialogue sessions aired to the Yemeni people "so that they can know who is the obstructer".

Saudi Arabia's King Salman was quoted as saying on Monday that the kingdom was also ready for a political meeting of Yemeni parties, under the auspices of the Gulf Cooperation Council (GCC).

Five out of the six GCC member states are part of the military coalition bombing which is bombing the Houthis.

More than 500 fatalities in two weeks of conflict

That prompted Saudi Arabia to launch a campaign of airstrikes on 26 March alongside regional Sunni Muslim Arab allies.

The United Nations says more than 500 people have been killed in the past two weeks in Yemen and nearly 1,700 wounded.

The conflict has turned Yemen into another front in Sunni Muslim Saudi Arabia's proxy war with Shia rival Iran, a struggle which is also playing out in Syria, Lebanon and Iraq.

Tehran denies Riyadh's charges that its arming the Houthis, and Mr Samad dismissed the accusations as rumours. "Even if there was Iranian support as is being said, it is not an excuse for this flagrant aggression," he said.

Mr Samad denied the Houthis want control of the south, home to a long-running secessionist movement, and said they were focused on confronting the threat from al-Qaeda.

"The sons of the south will run their own affairs and they will have the more prominent role in the coming political scene," he said. 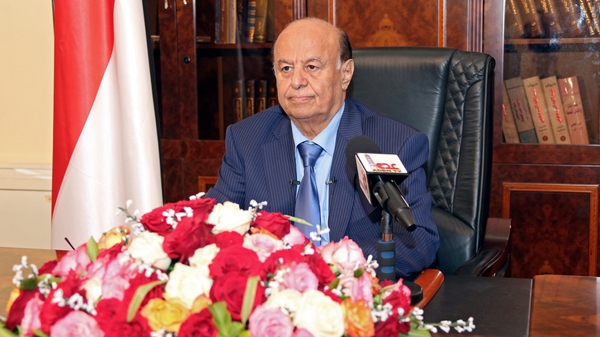