Ireland experienced a partial solar eclipse this morning, although cloud cover obscured the skies across much of the country.

Broken cloud offered close to ideal viewing conditions of the eclipse at the Blackrock Castle Observatory in Cork city.

A large crowd gathered at the castle where Cork Astronomy Club and Blackrock Castle astronomers set up a number of solar stations to observe the eclipse.

Schools from the area are availing of a number of solar workshops, a planetarium show and solar talks throughout the day at the observatory.

Although they happen quite regularly around the world, solar eclipses are quite rare in Ireland. 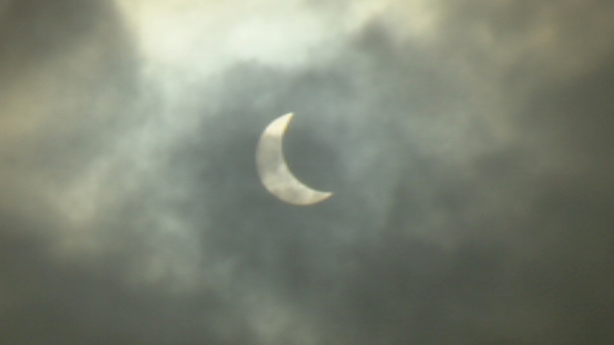 Caused by a shadow created by the Moon as it passes between the Earth and the Sun, the partial eclipse began at 8.30am.

By 9.30am 90% of the Sun’s surface was blocked out by the Moon, before it slowly began to reveal itself again.

Gallery of eclipse images from around Ireland

Air Corps takes to the skies for the eclipse

Eclipse in #Galway looks great through filter glasses. Attempt at reproducing view through camera on the phone pic.twitter.com/gDaX8D21vZ

Public viewing events were organised by astronomy clubs around the country.

Professor Tom Ray talks about the solar eclipse on a @news2dayRTE special https://t.co/4fKgnjL1gM

Want to geek out on all the details about today's #SolarEclipse? Look no further than here: http://t.co/UjgmECayXO pic.twitter.com/UzvaDx850C

Eclipse comes via Old French and Latin from a Greek word meaning 'fail to appear, forsake its accustomed place'. #eclipse2015