A new opinion poll shows an increase in support for Fine Gael and Labour.

The survey also found support for other parties and Independents had remained static or fallen slightly.

Over 1,000 voters were surveyed for the Paddy Power/Red C poll between Monday and Wednesday this week. 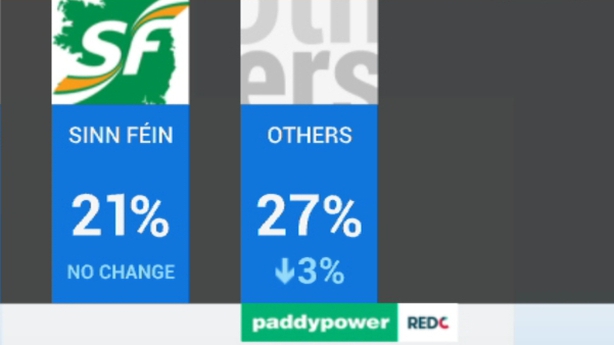 When the undecided voters (14%) are excluded and it is compared to the Red C poll last month for the Sunday Business Post, the main findings are:

The poll suggests the two Government parties may be reaping benefits from the economic recovery.

At 26%, Fine Gael has its highest ranking since last September, just before Budget 2015.

The 9% rating for Labour is a big improvement from a Paddy Power/Red C poll last June when the party dropped to 4%.

It got just 7% in the local elections. The party will be hoping it can now climb back into double figures.

Fianna Fáil at 17% is down one point. It has been polling around 17-18% in Red C recently but still reached 25% nationally in the local elections.

Sinn Féin remains unchanged at 21% and it has been at this level in Red C for several months.

The party might have expected a "bounce" given the fieldwork was conducted in the days immediately after the party's weekend Ard Fheis.

But it may be that any gain might have been offset by the political fall-out from the Paudie McGahon controversy following the BBC Spotlight programme on Tuesday night.

The fall in support for Independents/Others may reflect the recent political focus on government formation after the next election, particularly with Fine Gael, Labour and Sinn Féin all holding conferences in the run-up to this poll.

Taoiseach Enda Kenny said that he did not have a comment on the opinion polls, adding that the election was due to start in a year's time.

He said that the Government was going to go the distance, and that it needed time to secure recovery and make it sustainable for the future.

When don't knows (at 3%) are excluded, figures for the same-sex marriage referendum are 78% Yes and 22% No. This remains in keeping with a trend of three in four saying they will vote Yes.

However, there is an apparent trend in those who were previously undecided now moving toward the No camp.

The result of this shift is a small decline in support for the Yes side.

Once undecided voters are excluded, support for Yes moves from 80% to 78%.

Of those supporting the referendum, approximately one in ten still have some reservation either about gay adoption, or just gay relationships in general.

But, these reservations appear to have decreased somewhat over the past two months and mean that the "secure" Yes vote - those who say they have no reservations about gay couples adopting or about gay relationships - is currently at 60%. 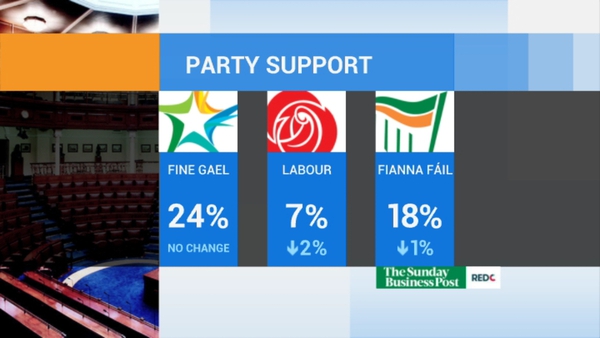 No improvement for Government parties in latest opinion poll