He was responding to a reporter with Russia State TV company, who asked him if he expected a war between Russia and Ukraine.

"I think that such an apocalyptic scenario is unlikely and I hope this will never happen," he said.

A transcript of the interview was published on the Kremlin website.

President Putin also said he did not see the need for another meeting with France, Germany and Ukraine on resolution of the conflict in eastern Ukraine.

Meanwhile, Kiev has accused pro-Russian rebels of opening fire with rockets and artillery at villages in south eastern Ukraine, all but burying a week-old European-brokered ceasefire deal.

The Ukrainian military said it could not pull weapons from the front as required under the tenuous truce, as long as its troops were still under attack.

Ukraine's currency, nearly in free fall this month, fell a further 10% today on fears that the truce could collapse.

The central bank said it would tighten currency rules to sustain the hryvnia.

The value of Ukrainian debt also fell, with bonds now trading at 40 cents in the dollar.

The reported shooting came closer to killing off the truce, intended to end fighting that has killed more than 5,600 people, which rebels ignored last week to capture the strategic town of Debaltseve in a punishing defeat for Kiev.

Kiev and its Western allies say they fear the rebels, backed by reinforcements of Russian troops, are planning to advance deeper into territory the Kremlin calls "New Russia".

There were hopeful signs for the truce over the weekend, with an overnight exchange of around 200 prisoners late on Saturday and an agreement yesterday to begin pulling back artillery from the front.

But Kiev said today that two of its soldiers had been killed and ten wounded in overnight fighting. 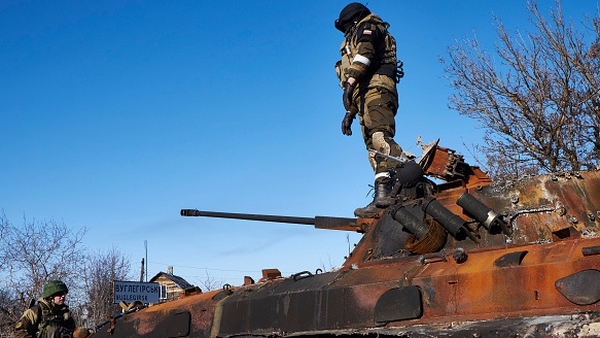