The protest got under way at around 2pm at the Central Bank in Dame Street.

The demonstration the made its way to Mountjoy Prison, where speakers addressed the assembled crowd from a platform. Paul Murphy tells protestors this is war and says this no longer just about water charges #waterprotest pic.twitter.com/vJhpek5ltp

Speaking after the anti-water charges march in Dublin, Ms Boylan said: "Instead of continuing with the love-in in Castlebar this weekend the Taoiseach would be better placed using his speech to announce the scrapping of water charges.

"The jailing of water charge protesters is appalling. These are citizens who engaged in peaceful protest as part of one of the biggest mass movements that we have seen in many years."

Protesters march against Government in Mayo

Meanwhile, protesters from a number of different groups demonstrated in Castlebar in Co Mayo against Government cuts and the introduction of water charges. The demonstrators stopped outside Enda Kenny's constituency office on Tucker Street and chanted their opposition to Government policies.

Anti water charges march getting underway in Castlebar this afternoon. A fusion of religion and politics in one sign pic.twitter.com/oZ0Pb4NwWG

They then gathered outside the hotel where the Fine Gael National Conference is taking place.

A number of groups were involved in the protest, including the local Right2Water Campaign, the National Reform Movement, representatives from the People Before Profit campaign and members of a group called Forgotten Farmers.

A number of people travelled to Castlebar for the demonstration on buses earlier.

Protesters from Leitrim, Sligo, Galway and Dublin were among those taking part.

Protesters making their views known to delegates on their way into the Fine Gael National Conference pic.twitter.com/zxCwoBx6dv

At the conclusion of the march through the town, a number of speakers outlined their opposition to Irish Water during speeches outside the conference venue.

Around 200 people gathered outside the TF Royal Theatre.

Independent Sligo Councillor Declan Bree told the gathering nothing short of the abolition of water charges would be accepted by those opposed to the measures.

He said the Government needed to know that no carrot was big enough to quell the anger of people regarding charges.

Cllr Bree said the jailing of activists would not weaken the resolve of the campaign.

He said it was an outrage that people had been jailed for trying to prevent the introduction of water metering and he called on all those opposed to charges to mobilise and ensure there was a mass campaign of non payment when bills were issued in April.

A number of protesters gathered around a bus transporting delegates to the conference this afternoon and chanted "shame", as the Fine Gael members made their way into the afternoon session. 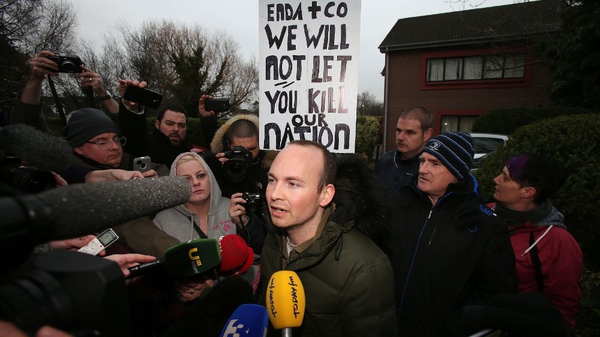