Yemen's Shia Huthi militia have announced the formation of a "security commission", a day after its takeover which opponents denounced as a "coup".

The declaration was followed by an explosion outside the Huthi-controlled presidential palace in the capital Sanaa that wounded a policeman and a civilian, witnesses said.

The Huthis said the defence and interior ministers in the government of outgoing President Abedrabbo Mansour Hadi were among the 18 members of the security commission.

It was the first statement from the militia, also known as Ansarullah, since it dissolved parliament and created a "presidential council" yesterday in a move it said was to fill a power vacuum.

The security commission "will lead the country's affairs until the establishment of a presidential council," said the statement published today by the official Saba news agency, which the Huthis seized in January.

It said the commission would be chaired by General Mahmud al-Subaihi, defence minister in the government of Mr Hadi, who offered to resign on 22 January under the pressure from the Huthis.

But his appointment and his presence alongside Huthi leaders when they announced their takeover yesterday was met with distrust from his entourage, considered close to Mr Hadi.

The head of his cabinet, Abdel Aziz Mansour, suggested the general had been "compelled by force to appear alongside" the Huthis.

"We lost contact with him and we are concerned for his life," he told AFP.

Yesterday the Huthis said they would set up a national council of 551 members to replace the legislature in the violence-torn country, a key US ally in the fight against al-Qaeda.

The five-member presidential council would form a transitional government to govern for two years, the Huthis announced in a "constitutional declaration".

The announcement came after a Wednesday deadline set by the militia for political parties to resolve the crisis passed with no agreement.

It sparked protests in the capital and in the oil-rich eastern province of Marib, where influential tribal leaders said they "rejected the authors of this coup".

Yemen has been riven by instability since the Arab Spring-inspired uprising that forced autocratic president Ali Abdullah Saleh from power in 2012.

Saleh has been accused of backing the Huthis, as has Shia-dominated Iran.

The turmoil has raised fears that Yemen, which lies next to oil-rich Saudi Arabia, could become a failed state.

The UN Security Council yesterday raised the prospect of possible sanctions as the rebels sought to tighten its grip on the country.

Security Council President Liu Jieyi said the body's 15 members were ready to "to take further steps" if negotiations to halt the unrest were not resumed "immediately."

The Security Council called for the immediate release of President Hadi and members of his government from house arrest. 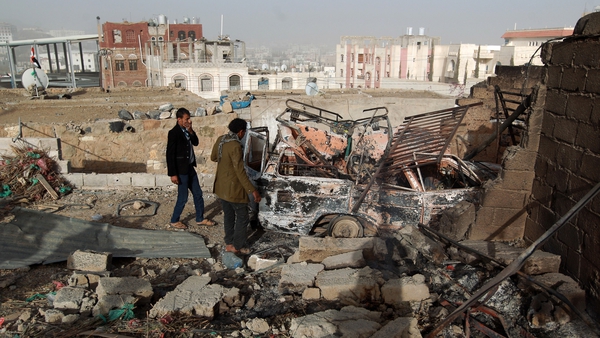