New data released by scientists working with the Rosetta spacecraft has built the most comprehensive portrait yet of the comet it is chasing.

The centre of comet 67P/Churyumov-Gerasimenko (67P) is made of a combination of dust, rock, and frozen gas which might be quite porous and fluffy.

The surface of the comet's nucleus is covered with a layer of opaque dust made of organic materials, but very little water - an indication that the sunlit surface of 67P is generally dehydrated.

Rosetta, a small European Space Agency spacecraft launched almost 11 years ago, has been orbiting 67P since it caught up with it on 6 August last year.

On 12 November it dropped its Philae lander onto the surface of the comet, which is currently around 300 million kilometres from earth and travelling towards the sun.

The lander ended up resting in the shadow of a nearby cliff which meant its solar panels could not work, causing its batteries to run out.

The papers, published in the journal Science, represent the first substantial release of scientific data gathered by the international team of researchers running experiments on the Rosetta orbiter.

It is expected that further data gathered by the Philae lander will be released later in the year, after the scientists have completed their analyses.

Data from Rosetta's infrared imaging system also found dune and ripple-like structures, tail like shapes, and other processes that have carved out features on the surface. The scientists also say the ratio of dust to gas on 67p is higher than had been expected.

Rosetta will now follow the comet at close range as it approaches and rounds the Sun in August 2015.

The data released today will provide a base line against which scientists can measure any changes in activity of the comet caused by it heating up on approach to the Sun. 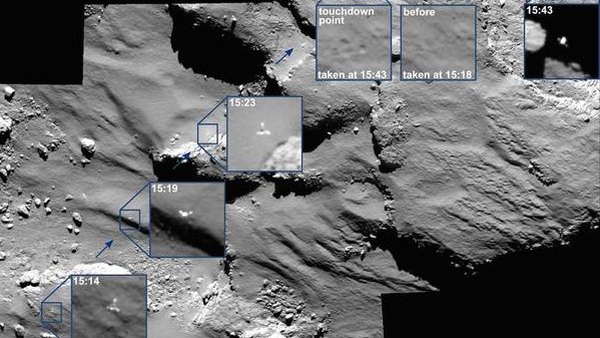