The British Beagle-2 spacecraft, which disappeared while attempting to land on Mars in December 2003, landed successfully on the planet's surface, the chief executive of the UK Space Agency has confirmed.

The probe was carried by the Mars Express spacecraft, which was blasted into space by a Russian rocket from Kazakhstan in June 2003.

It was released from its mother craft on 19 December 2003 and was due to land in a near-equatorial region of Mars known as Isidis Planitia six days later.

However, nothing was heard from the lander after its scheduled touchdown, and subsequent follow up searches by Mars Express and NASA's Mars Odyssey missions found nothing.

Now, over a decade later, the lander has been identified in images taken by the high-resolution camera on NASA's Mars Reconnaissance Orbiter. 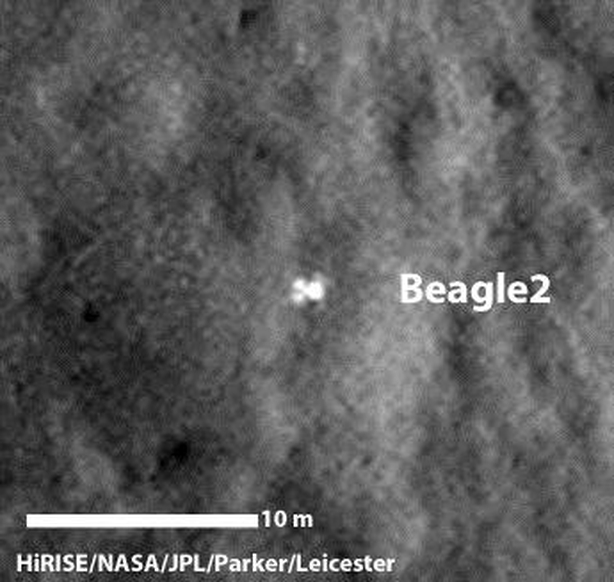 The lander is seen partially deployed on the surface, showing that the entry, descent and landing sequence worked and it did indeed successfully land on Mars on Christmas Day 2003.

The discovery was made by former members of the Mars Express team, working in parallel with members of the Beagle-2 industrial and scientific teams, after they searched high resolution images of the red planet.

Because Beagle-2 is so small, less than 2m across when fully deployed, this meant it was a painstaking task, which pushed the resolution of cameras in orbit around Mars to their limits.

After a shape similar to that of Beagle-2 was found in the expected landing site, further images were obtained and analysed by the camera team, the Beagle-2 team and NASA's Jet Propulsion Laboratory.

The images show the lander in what appears to be a partially deployed configuration, with up to three of its four solar panels open, and with the main parachute and what is thought to be the rear cover with its parachute still attached close by. 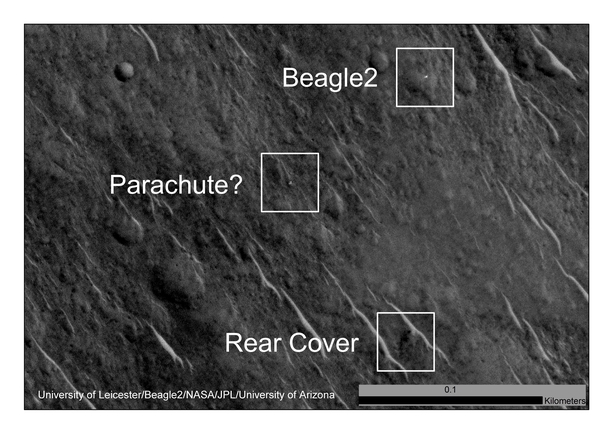 The size, shape, colour and separation of the features are consistent with Beagle-2 and its landing components, the team says, and lie within a distance of about 5km from its centre.

The mission's call-sign was composed by the Britpop band Blur, and the "test card" used to calibrate the probe's cameras and spectrometer instruments after the landing was painted by Damien Hirst.

Despite its small size and shoestring cost Beagle-2 contained some sophisticated hardware.

Elements of its miniaturised technology will be employed on ExoMars, the European rover that will be sent to Mars to search for signs of life in 2018.