French police are searching for two brothers from the Paris region and another man from Reims in connection with today's gun attack in Paris.

Police confirmed that an anti-terrorism raid is under way in northeastern city of Reims.

Brothers Said Kouachi and Cherif Kouachi are both French nationals in their early 30s, while the nationality of 18-year-old Hamyd Mourad is unknown.

Cherif Kouachi was convicted in 2008 of terrorism charges for helping facilitate fighters going to Iraq and sentenced to 18 months in prison.

A member of the elite unit at the scene in Reims said either the suspects will be able to escape or "there will be a showdown".

They urged journalists at the scene to remain "vigilant".

Another 20 people were injured in this morning's attack, including four or five critically.

Police union official Rocco Contento described the scene inside the offices as "carnage".

Some of the best-known cartoonists in France were among the 12 killed.

Publication director Stephane Charbonnier, known as Charb, and the cartoonists known as Cabu, Tignous and Wolinski were killed in the attack on the paper.

Mr Charbonnier was included in a 2013 'Wanted Dead or Alive for Crimes Against Islam' article published by Inspire, the terrorist propaganda magazine published by al-Qaeda. 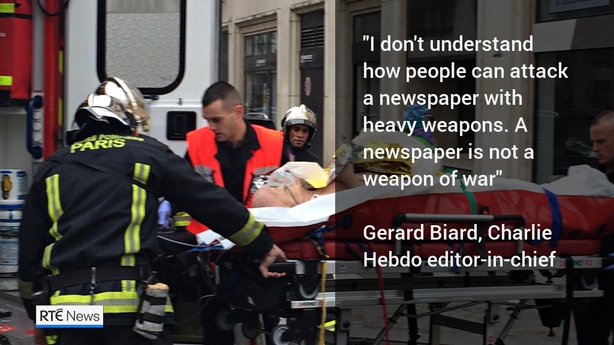 Gunmen armed with Kalashnikovs and a rocket-launcher opened fire in the offices this morning.

They reportedly shouted "we have avenged the prophet" during the attack.

"This is a terrorist attack, there is no doubt about it," President Francois Hollande told reporters after rushing to the scene. 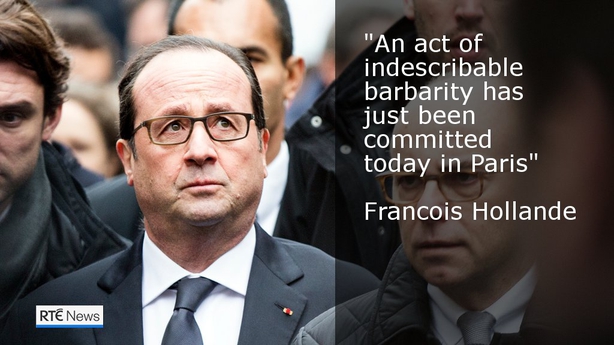 Mr Hollande this evening called for a national day of mourning tomorrow to remember the victims.

The office was firebombed in the past after publishing cartoons in 2011 joking about Muslim leaders.

Charlie Hebdo (Charlie Weekly) is renowned for courting controversy with satirical attacks on political and religious leaders and has published numerous cartoons lampooning the Prophet Muhammad.

Mr Hollande said 40 people were "saved" during the incident.

The government held an emergency meeting following the attack and France has raised the Paris alert status to its highest level. 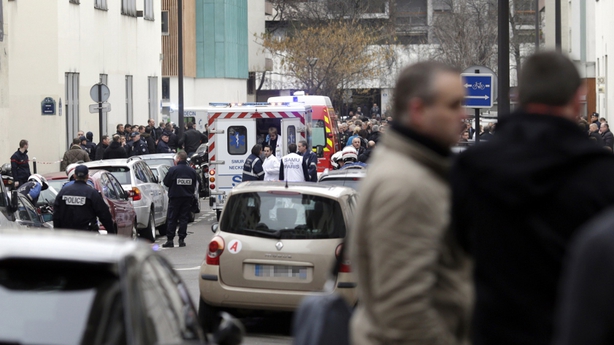 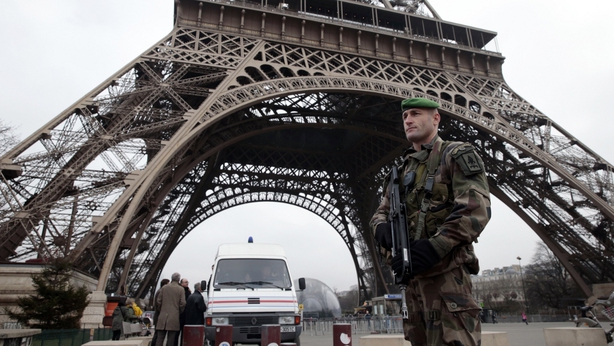 France is already on high alert after calls last year from Islamist militants to attack its citizens and interests in reprisal for French military strikes on Islamist strongholds in the Middle East and Africa.

Sirens could be heard across Paris as Prime Minister Manuel Valls said security would be stepped up at transport hubs, religious sites, media offices and department stores. 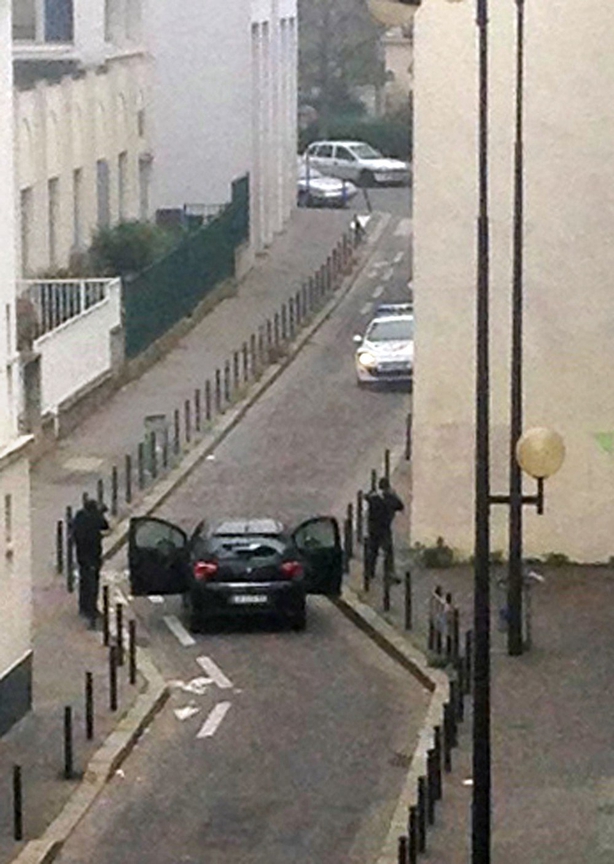 iTELE quoted a witness as saying he saw the incident from a building nearby in the heart of the French capital.

"About a half an hour ago two black-hooded men entered the building with Kalashnikovs [guns]," Benoit Bringer told the station.

"A few minutes later we heard lots of shots," he said, adding that the men were then seen fleeing the building.

In a video of the attack filmed by a man taking refuge on a nearby rooftop, the men can be heard shouting "Allahu Akbar" (God is greatest) between rounds of heavy arms fire.

"They're coming out. There are two of them," says a new voice on the video, as two men appear in the frame, then raise their arms in a shooting posture.

Interactive on the Paris attack that includes a map and details on the victims: http://t.co/jqD4s9KVqG pic.twitter.com/LQtlcTsn40

The murders in Paris are sickening. We stand with the French people in the fight against terror and defending the freedom of the press.

The White House has condemned the attack in the "strongest possible terms".

"Everybody here at the White House are with the families of those who were killed or injured in this attack," White House spokesman Josh Earnest said.

FBI Director James Comey has said it working with police in France to bring the attackers to justice.

German Chancellor Angela Merkel said the shooting is not only an attack on French citizens, but also on the freedoms of press and speech. 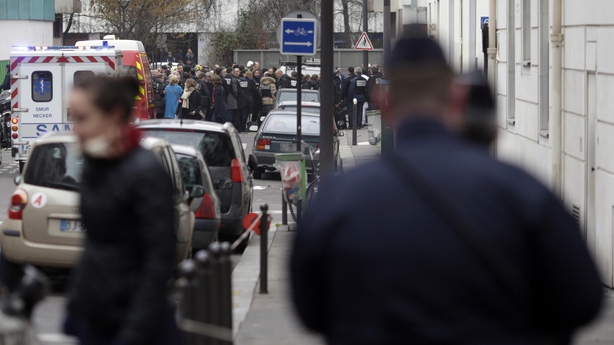 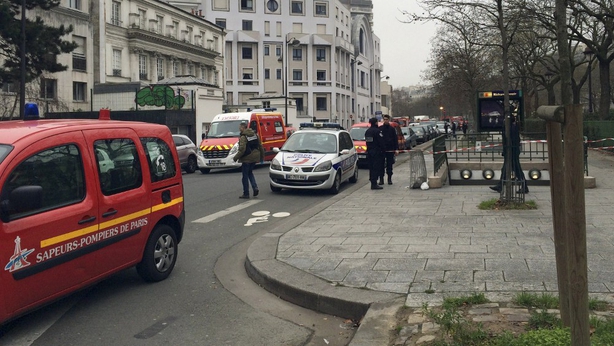 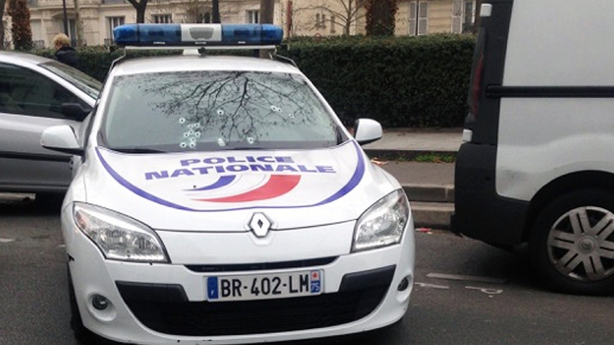 Late last year, a man shouting "Allahu Akbar" injured 13 by ramming a vehicle into a crowd in the eastern city of Dijon.

Mr Valls said at the time France had "never before faced such a high threat linked to terrorism". 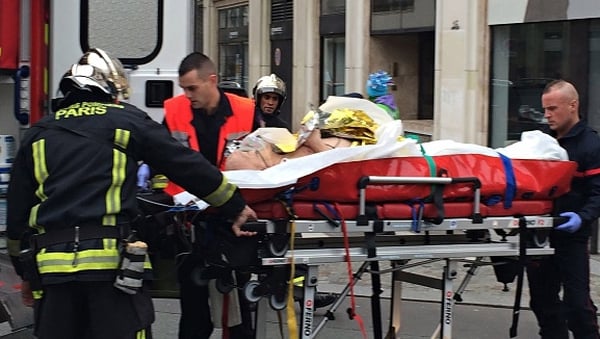 In Pictures - Gun attack in Paris