Iraqi Kurds have said they have broken a siege on a mountain where Yazidi civilians and fighters have been trapped since August.

Thousands of Yazidis and other Iraqis have been trapped on Mount Sinjar by fighters from the Islamic State group.

A Kurdish official said a broad peshmerga operation backed by US-led air strikes broke the IS siege of the mountain.

The news came as the US said air strikes killed several IS leaders in recent weeks.

"We believe that the loss of these key leaders degrades [IS's] ability to command and control current operations against Iraqi Security Forces, including Kurdish and other local forces in Iraq."

The strikes showed "the coalition's resolve" in helping Iraqi forces take on IS.

The bombing raids were carried out mostly in northern Iraq, defence officials said, but they did not say where each leader was killed.

The attacks came amid a wider effort to pile pressure on IS before a major counter-offensive in coming months.

US officials named three figures who were killed in the targeted raids and said other "mid-level" leaders were also killed.

The most significant figure was identified as Haji Mutazz, better known as Abu Muslim al-Turkmani, who was deputy to the group's chief, Abu Bakr al-Baghdadi.

He was believed to be overseeing the group's military operations.

In addition, a third militant, known as Radwin Talib, described as a "mid-level" figure overseeing the captured city of Mosul, was killed at some point after mid-September. 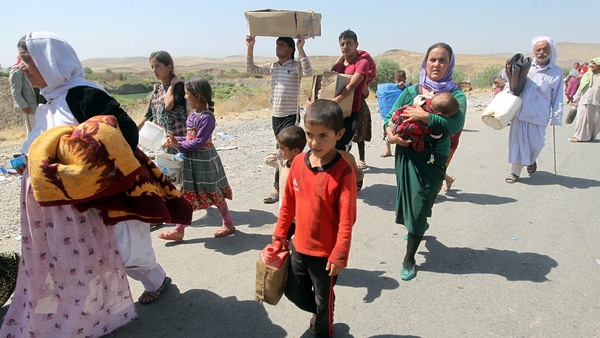