"The  37-year-old mother of several of the children involved in this incident has been arrested for murder overnight and is currently under police guard at the Cairns Base Hospital," Detective Inspector Bruno Asnicar told reporters.

The woman has not been charged.

A 37-year-old woman has been arrested for murder & is under police guard in hospital. #Manoora

Local reports have said the children were stabbed to death, but this has not been confirmed by police.

Queensland state police said in a statement they were called to a house in the Cairns suburb of Manoora just before midday local time after reports of a woman with serious injuries on the premises.

They found the bodies of the children, aged between 18 months and 15 years, when they were examining the house.

The Australian Associated Press said another sibling, a 20-year-old man, arrived home to find the bodies.

Detective Inspector Bruno Asnicar said police believed the woman was the mother of seven of the children.

"There is no formal suspect," Mr Asnicar told reporters.

"We are talking to a range of people. Anybody who has had any involvement in the past two or three days is a person of interest," he said.

Forensic officers have locked down the scene and there has been no formal identification of the children. 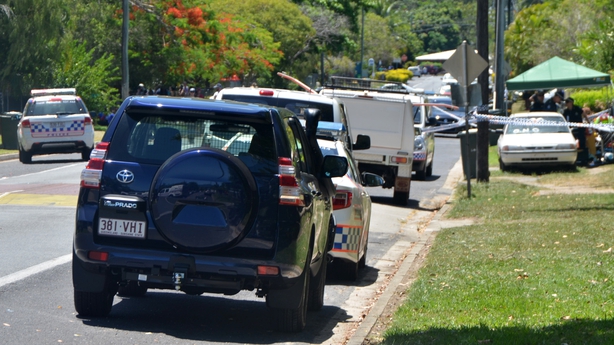 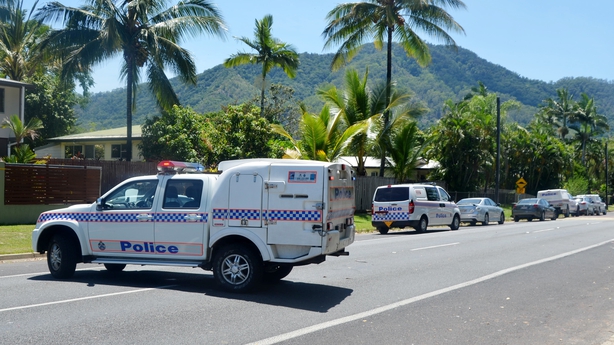 Australian Prime Minister Tony Abbott called the events in Cairns "heartbreaking" and acknowledged that these were "trying days" for Australia.

The events in Cairns today are heartbreaking & all parents would feel a gut-wrenching sadness at what has happened.

"This is an unspeakable crime. Tonight, there will be tears and prayers across our country for these children," he said in a media release.

Australia is in a state of heightened alert after the siege at a Sydney café earlier this week. Police in Cairns have urged people to remain calm.

Detective Inspector Bruno Asnicar speaks to reporters at the scene

Detective Inspector Bruno Asnicar told reporters: "There is no need for the public to be concerned about this, other than it is a tragic, tragic event.

"The situation is well controlled at the moment and there shouldn't be any concerns for anyone else."

Specialist officers are being sent from Brisbane, the state capital, to assist with the investigation, Mr Asnicar said.

#INFOGRAPHIC Map locating the Cairns street, Australia where eight children have been found dead at a house @AFP pic.twitter.com/Q6i9jBuH8r