President Michael D Higgins has said that he hopes that China's future engagement with change will include the mass of the people, in terms of social protection, political participation and cultural expression so as to facilitate a real democratic achievement.

The President made the comments in a keynote address to students at Fudan University in Shanghai during his State visit to China.

He said that Ireland attaches great importance to cultural freedom which it sees as the wellspring of its own independence.

After discussing the global economic crisis, he said the world must break free of failed paradigms.

He said that today the Chinese people are in a position to freely and creatively engage with change and explore the possibilities for new models.

The President said that those models would hopefully be inclusive of the mass of the people, in terms of social protection, political participation and cultural expression so as to facilitate a real democratic achievement.

He called for a new architecture of revitalised multilateral institutions to anticipate and provide an alternative to a violent uprising of the excluded or oppressed.

He also warned that without a multilateral approach "we may find ourselves reeling from old and revived fundamentalisms".

The President also called for cooperation on the global challenges which the world was facing through concerted action grounded in an ethical consciousness of our fundamental interdependency, adding that he believed this could be done without undermining national sovereignties.

Following his address at Fudan, President Higgins and his delegation travelled to Hangzhou near Shanghai where he visited the headquarters of Alibaba - China's answer to eBay.

He was greeted by Alibaba owner Jack Ma, the richest man in China.

Earlier the President opened an exhibition of Irish art in Beijing.

'The Weathering' features Irish design and craft and is on show in the 798 contemporary art district.

The President and Mrs Higgins also watched an art class for children during the visit. 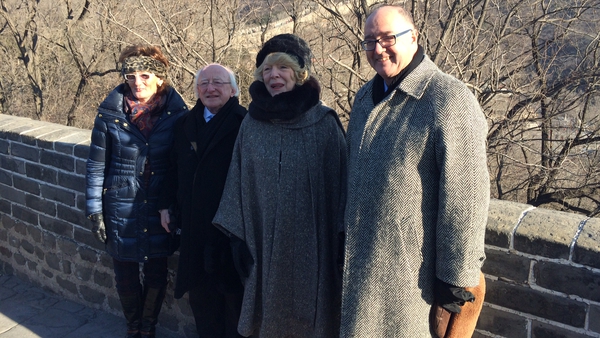