Tens of thousands of people have attended a demonstration near Leinster House in Dublin to protest against water charges.

The main rally at Merrion Square passed off peacefully.

However, a garda sustained an eye injury at nearby Kildare Street after a number of people threw missiles and attempted to break through a barrier.

The garda was taken to hospital for treatment.

Right2Water estimated that more than 100,000 people attended the main rally, while gardaí put the figure at "30,000 plus".

Feeder marches from both the north and south of the city had converged at the main stage on the junction of Merrion Square South and Merrion Square West.

The crowd at the rally was told that the campaign would continue until the water charges were abolished.

Sinn Féin leader Gerry Adams told the crowd that Taoiseach Enda Kenny and Tánaiste Joan Burton do not listen to ordinary people, only the elite in society.

United Left Alliance TD Clare Daly said the march would be looked back on as the moment that changed Ireland.

There were also speakers from protests groups, such as Ballyhea says No! and Crumlin says NO to water meters. 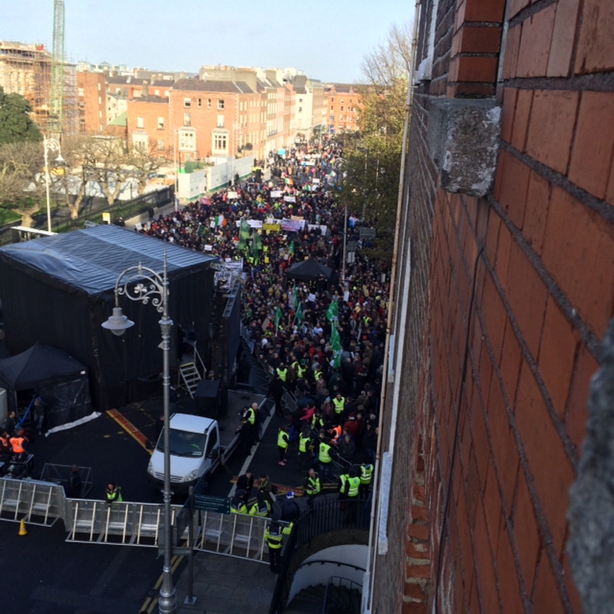 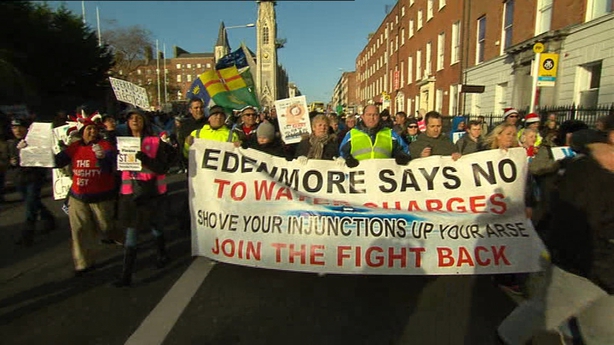 As It Happened - Water charges protest

Earlier, Minister for the Environment Alan Kelly said he did not envisage any change to the water charges.

He also said he had not seen a realistic alternative from the Opposition on how it will pay the billions needed to improve water infrastructure.

Mr Kelly also said the water issue could have been handled better by the minister who preceded him.

Minister of State at Department of the Environment Paudie Coffey also said there would be no change in the Government's policy on water charges despite today's protest in Dublin.

Speaking on RTÉ's Morning Ireland, he said the Government was putting in place a national utility to invest in essential infrastructure.

He said the Government recognises peoples' right to protest and it had listened, acted and revised the water charging system, which will cost €1.15 a week for a single household or €3 for a multiple-person household.

"That's for the provision of drinking water but also to pay for the disposal and treatment of raw sewerage," he said.

Mr Coffey said the Government had moved as far as it can and that alternatives proposed by opponents such as Anti-Austerity Alliance TD Paul Murphy are not sustainable.

He said: "I think if we look closely at what that economic argument is, it's to raise further taxes on working people to pay for this water."

Asked about the possibility of people not paying, Mr Coffey said almost 950,000 people had already registered with Irish Water and the Government expected that one million will have registered by Christmas.

Mr Murphy said people would come out in big numbers because they have not been satisfied by the new package on water charges announced last month by Minister Kelly and have not been fooled by it.

He said people would demonstrate their anger at the Government but he said it would be a peaceful, family-friendly event. 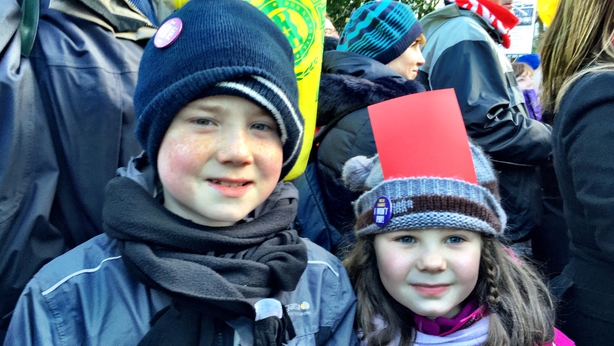 Brendan Ogle of the Right2Water campaign told RTÉ’s Six One news that he disputes the Government figure that 937,000 people have registered to pay the charge.

Mr Ogle said that the Government is disconnected and called its members “cronies”.

He said that citizens are being forced to pay for what he termed a "private gambling debt" and said that the campaign will continue until the Government deals with the issue.

Traffic restrictions were in place in Dublin city centre for the protest.

The protest was the latest in a number of anti-water demonstrations that have taken place across the country in recent months.

Members of the Detroit Water Brigade, who took part in the demonstration, will visit Cobh in Co Cork tomorrow afternoon, where an anti-water meter campaign is continuing.

The delegation will address a Right2Water meeting in Cork city tomorrow night.

The Detroit Water Brigade claims that 40% of the population in Detroit is facing having its water cut off.

Meanwhile, reducing the Universal Social Charge further was raised by a number of members at the Fine Gael Parliamentary meeting this evening.

Many members said the party should focus on the issue. 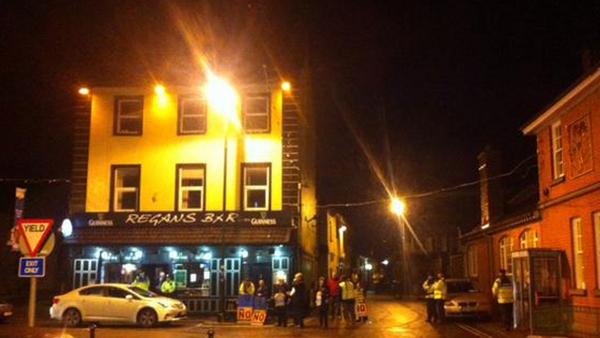 Taoiseach greeted by Roscommon anti-water protesters at a pub