President Michael D Higgins has arrived in Johannesburg on the final leg of his three-country official visit to Africa.

The President and his wife Sabina will include Johannesburg, Pretoria and Cape Town on a nine-day trip to South Africa.

They have also visited Ethiopia and Malawi in the past two weeks.

South Africa is Ireland's second largest trading partner in sub-Saharan Africa and much of the President's visit will focus on enhancing economic relations between the two countries.

Later this evening, President Higgins will attend a Business Ireland South Africa networking event, where he will deliver some remarks on trade and investment relations between the countries.

Mr Higgins will be accompanied by Minister of State at the Department of Agriculture Tom Hayes during the visit.

President Higgins will deliver a keynote address on human rights in Soweto and will also have a meeting with South African President Jacob Zuma.

Mr Higgins, who attended Nelson Mandela's funeral last year, will also visit a number of key sites associated with the struggle against apartheid, including Robben Island. 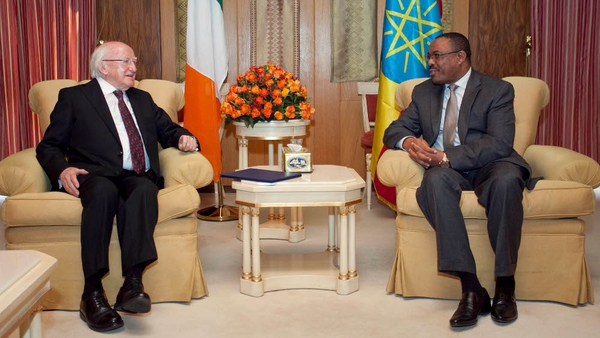 Agreements between Ireland and Ethiopia signed