However, she stated "categorically" that she had no information that any alleged abuser was living in the Republic after being relocated by the provisional republican movement.

Speaking on RTÉ's Morning Ireland, Ms McDonald said if she had such information, she would immediately pass it on to gardaí.

She was asked if she accepted Taoiseach Enda Kenny's assertion in the Dáil yesterday that child abusers were moved out of Northern Ireland and into the Republic by the IRA, who would therefore know who and where they are.

Ms McDonald said: "I accept that people were expelled ... I can't give you a comprehensive answer to the question (of where), because I don't know.

"What I do know is that anecdotally, and according to the Base 2 project, I understand they have reported that in the majority of cases, these people were relocated to England or Scotland.

"Bear in mind, a lot of these people would be people against whom it was alleged that these offences were committed by them."

The Dáil debate was prompted by Máiría Cahill's allegations that she was raped by a member of the IRA then forced to face the alleged assailant in a republican style court.

Sinn Féin president Gerry Adams said he believed Ms Cahill was abused but rejected claims his party was involved in a cover-up of abuse.

Asked whether she knew if sexual predators were living in the Republic and their whereabouts known to republicans, Ms McDonald said: "I want to tell you categorically that I have so information. I want to tell you categorically if I did, I wouldn't be having this chat...I would be with the local gardai or the appropriate authority handing that information over immediately.

"I wouldn't skip a beat, I wouldn't second-guess myself. It would be a matter of no concern to me who the alleged perpetrator was."

Referring to an accusation by Ms Cahill earlier in the same programme that she had smirked at her when they met momentarily in Leinster House yesterday, Ms McDonald said she had smiled at the Belfast woman and apologised if she had interpreted differently.

Ms Cahill has said her motivation for raising her case was to try and protect children and victims who suffered in silence for years.

She said we now know there are other victims out there, some of whom have made complaints to gardaí and the PSNI and she has already passed on names to the PSNI.

Ms Cahill also said she is disappointed and angry at Sinn Féin's performance in the Dáil yesterday, saying the body language of Mr Adams and Ms McDonald "smirking and tapping away on their phones" during the debate is indicative of the way she has been treated by the party.

She said she wants Sinn Féin to do the right thing and admit what they know, and acknowledge that she was brought into a room with her rapist, there was an internal IRA investigation and Mr Adams knew about it.

She said however she does not believe they will ever admit that.

She said she has information that the party conducted an internal review and a senior Sinn Féin figure was briefed to conduct a damage limitation exercise and called on the party to bring that information forward.

She also accused Sinn Féin of actively promoting a campaign of vilification of her on social media and called on Mr Adams to tell people to desist from comments on social media.

Minister for Health Leo Varadkar has said he does not believe Mr Adams when he says he does not have any knowledge of any republican sex abusers being moved to the south.

The minister said revelations that the republican movement may have moved child abusers around the country are very worrying.

He said it was high time that Sinn Féin started telling the truth about "their past, about the present and the future". 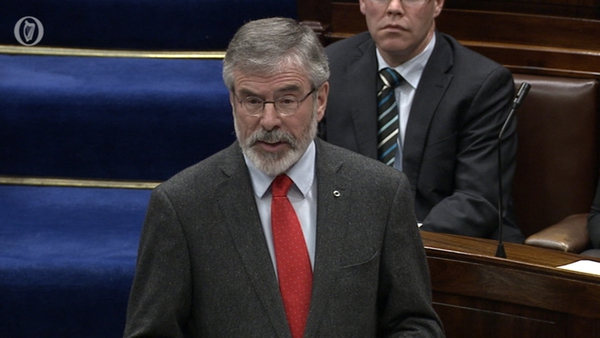