Farmers are continuing their 48-hour protest at meat plants across the country in a bitter dispute over beef prices.

The Irish Farmers' Association blockade of beef factories entered its second day today, with both sides still deeply divided over the price factories are paying farmers for cattle.

The IFA limited the current protest to 14 out of the country’s 29 meat factories.

The factories affected are those owned by Larry Goodman's ABP Food Group, Kepak, and Dawn Meats.

Speaking this evening IFA President Eddie Downey said that thousands of farmers across the country had supported the protest.

He said the demonstration has sent a clear message to the industry that prices must increase.

Earlier today, Minister for Agriculture Simon Coveney said he believes that solutions and compromises will be in place over the next few days that all sides in the nationwide beef dispute can live with.

Mr Coveney said that the protests outside meat factories are an expression of pent up farmer anger that has been built up over the last ten months.

However, he said all sides are angry and that the factories do not want to see their businesses closed.

He added that this is a time for leadership on all sides to keep their heads.

Mr Coveney has just returned from a trade mission to China where he made good progress in his attempts to open up the Chinese market for the export of Irish beef.

However, IFA president Eddie Downey said there is little use in opening up markets all over the world if it does not deliver for farmers.

This evening, the Irish Creamery Milk Suppliers Association released a statement saying that meat factories' concessions on age and weight was not sufficient enough to restore farmer confidence in the beef sector.

ICMSA President, John Comer, noted that Meat Industry Ireland (MII) has accepted that certain age and weight limits will have to be reviewed but he insisted that the 225 'box' QPS beef pricing grid that has been the object of much farmer criticism on the grounds of its complexity and unpredictability, will also have to be looked at with a view to complete reform and simplification.

The blockade is the second protest in less than two weeks.

The previous 24-hour protest is estimated to have cost the industry more than €10m in lost output.

Meat Industry Ireland has said the protest will cost the industry thousands of jobs.

Both sides are still divided over the large gap in cattle prices between Ireland and Britain.

Meanwhile, talks between the Irish Cattle and Sheep Farmers Association and Meat Industry Ireland have ended with signs that some progress has been made on specification issues.

The ICSA has been campaigning for the relaxation of age limits on cattle, as well as what they call more realistic specifications for bulls, and claim they are hopeful of seeing progress on these issues at Wednesday's Forum.

The ICSA President Patrick Kent has said that a regulator is needed for the industry.

Speaking on RTÉ's News at One Mr Kent said that there area number of issues on the table, adding that there is a need for transparency.

Mr Kent also said that current discussions are "PR for the meat industry", but said he is optimistic about the outcome on talks related to specifications.

Taoiseach Enda Kenny has said it is important that the dispute is resolved in the interests of farmers, producers and the Irish economy.

Mr Kenny said he felt the limited blockade being undertaken by farmers today was an indication that progress could be made.

He said farmers felt very aggrieved and were making their concerns felt through their protests at processing plants.

However, he said the only way to resolve the disagreement over prices was by both sides sitting down at the Beef Forum established by the Minister for Agriculture and working out a solution.

He said farmers had delivered beef of the standard required and that it was important that the impasse was resolved to allow the continued export of Irish beef to the international market. 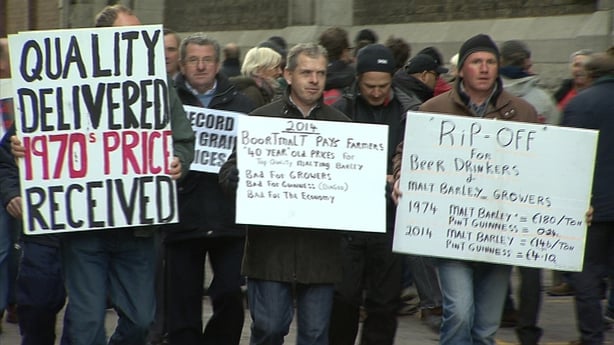 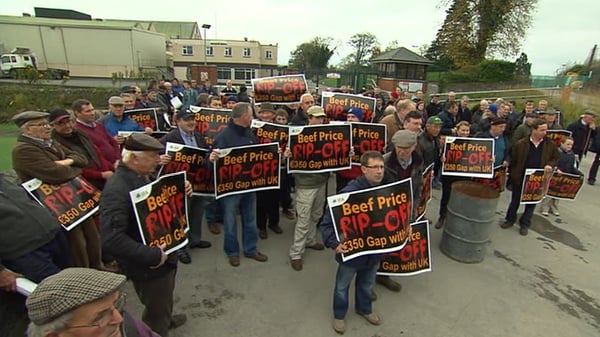