Heavy shelling around the eastern Ukrainian city of Donetsk has increased strains on a two-month-old ceasefire between Ukrainian government forces and pro-Russian separatists.

Reporters in rebel-held Donetsk said shelling by heavy artillery continued throughout the night and into the early hours, and then picked up again this morning.

The shelling appeared to come from areas held by the separatists as well as from positions controlled by the government forces.

It could be heard in the centre of the city, which had a pre-conflict population of more than 1 million.

The truce, agreed on 5 September, has looked particularly fragile over the past week.

Each side accuses the other of violations after separatist elections on 2 November that were condemned as illegitimate by the West.

Residents said there appeared to be fighting near Donetsk airport, around which battles have repeatedly violated the ceasefire in a conflict in which more than 4,000 people have been killed since mid-April.

There were no immediate reports of new casualties.

Donetsk's City Council said in a statement on its website that the shelling had damaged residential buildings and that firefighters were at the scene of one of the damaged buildings.

The rebels have accused Ukrainian forces of launching a new offensive.

Ukraine's military accused Russia on Friday of sending a column of 32 tanks and truckloads of troops into the country's east on Thursday.

Russia has denied arming the rebels.

The European Union has said the arrival of reinforcements in Ukraine separatist areas "very worrying". 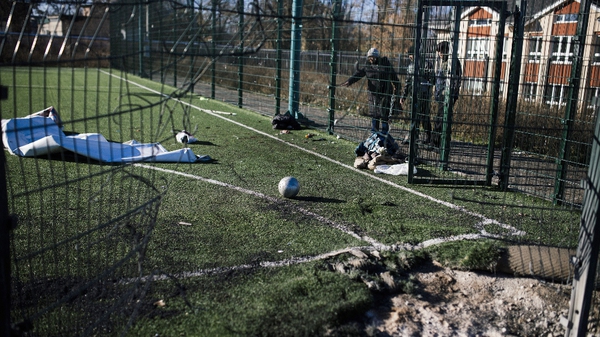 32 tanks cross into Ukraine from Russia