A column of 32 tanks and other heavy weapons has entered Ukraine from Russia, the Ukrainian military said, after the latest fighting left five dead and at least 31 injured.

A military spokesman said a convoy made up of 32 tanks, 16 howitzer cannons and 30 trucks of troops and equipment crossed the border into the rebel-controlled Lugansk region yesterday.

Another column including trucks and three mobile radar stations crossed another border point in the same region, he said.

On Wednesday, two teenage boys were killed during shelling around Donetsk's international airport, where government forces are holding out against pro-Russian separatists.

One shell landed in a nearby school killing the two boys aged 14 and 18.

At least four other people were wounded in the attack.

The United States has backed a Ukrainian investigation into the shelling.

Overnight, around 22 civilians and soldiers were wounded in shelling around the airport.

Seven paratroopers were wounded by an improvised explosive device during a patrol near the village of Sokolnyky, also in the Luhansk region.

Meanwhile, a Kremlin adviser said Russia is committed to a two-month-old agreement on a ceasefire in eastern Ukraine and wants further talks held to build on peace moves involving government forces and separatists.

Foreign policy adviser Yuri Ushakov also said Russia respected the will of voters after a separatist leadership election in the east of Ukraine regarded as illegitimate by the West.

But, following Western criticism of Russia's stance on Sunday's vote, he said he had deliberately chosen the word "respect" rather than "recognise". 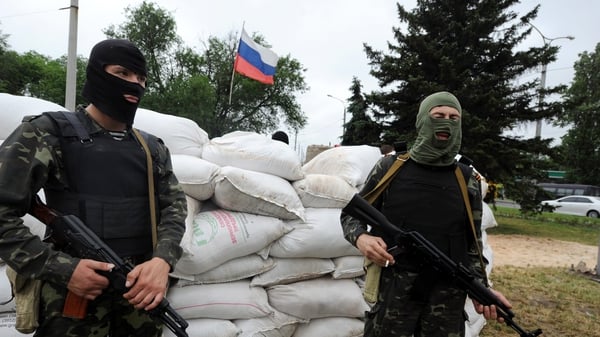