The President of the Irish Farmers' Association, Eddie Downey, said that while some progress had been made at the negotiations, the issue of the gap between prices being paid for beef in Britain, compared to here, remains a major sticking point.

A 48-hour nationwide blockade of beef factories by the IFA is planned to start tomorrow afternoon.

The Chairman of Beef Industry Ireland, Ciaran Fitzgerald, said that despite the breakdown of the negotiations, his organisation is still open to talks and he has again urged farmers to call off their planned protest.

Mr Fitzgerald said that progress has been made on beef specification issues which were central to part of the dispute.

Both sides are divided on one specific issue: the price differentials between what farmers get for beef in Ireland and what they are paid in the United Kingdom.

He said that the factories had shown a willingness to engage with the farmers despite the threat of the blockade.

The blockade has been organised by the IFA.

Beef industry representatives said that they had come to the talks because the Minister of Agriculture had asked them to engage.

They called on the farmers to call off the protests still to take place at 3pm on Sunday.

Meat Industry calls on IFA to call off blockade

Earlier, Meat Industry Ireland called on the IFA to call off its planned 48-hour blockade of meat factories.

MII had questioned whether the ongoing negotiations between the factories and the farmers can proceed in a constructive manner in light of such a threat.

The factories said all parties were asked by Minister Simon Coveney to desist from protest and to commit to the talks.

Instead the IFA has very publicly demanded a major price increase and confirmed that it intends to engage in further disruptive action.

This was the ninth day of the two-week period for intensive negotiations between the meat factories and farmers agreed at the Beef Forum.

The last blockade - a 24-hour protest almost two weeks ago - cost the factories between €10m and €15m in lost output.

Mr Coveney said he has spoken to all parties involved and urged them to make progress on the issues under discussion before the Beef Forum meets again on Wednesday.

He said: "All sides need a beef market with stability and certainty. I welcome the fact that the IFA and MII are sitting around the table." 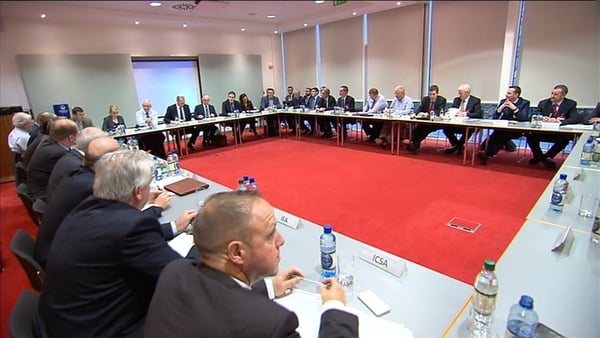