Provisional searches for another of the Disappeared have started in Co Meath, close to the rural bog where the body of Brendan Megraw was found recently.

The new work is at a very early stage and it may be several weeks before a decision is made to move to a digging phase.

The move comes little over a month after the remains of Mr Megraw were finally found in a drainage ditch in the middle of Oristown bog 36 years after he vanished.

Mr Lynskey went missing in 1972, but it was only in 2010 that the IRA finally admitted to executing and secretly burying him.

A commissioner for the Independent Commission for the Location of Victims Remains said "new information" had prompted the search for his remains.

Commissioner Frank Murray said: "The Commission is now starting preliminary work, at a very early stage I must emphasise, in relation to Joe Lynskey."

"Preliminary work has started and it's ongoing as we speak.

"It involves scanning the ground but there is no date or idea exactly when we could do something in the way of a dig there.

"With the ground radar operation you need to get that data analysed scientifically and see if there is anything of interest, are there any anomalies in the ground that you have surveyed and then follow through on those.

Mr Murray and fellow commissioner Kenneth Bloomfield joined with families of the Disappeared in Belfast today to renew their appeals for information that would help find their loved ones.

The commission, which was set up by the British and Irish governments in the wake of the Good Friday Agreement, was tasked with investigating the cases of 16 people killed and secretly buried by republicans during the Troubles.

All information passed to the body is confidential and cannot be used in criminal prosecutions.

Mr Lynskey is one of six victims still to be found.

His niece Maria Lynskey said she was "heartened" that new searches were taking place.

"Joe was the first of the Disappeared, in '72, so he is 42 years missing," she said. "We didn't know until about four or five years ago that he was a Disappeared - we thought he was in America. That was a terrible shock."

Ms Lynskey said all the victims needed to be found for the sake of their families.

"I feel everybody is entitled to closure, they are all entitled to a respectful and dignified funeral, to be brought back to their own," she said.

"It's a cruel thing that has happened here for everybody.

"Even for the ones who have found their bodies it must be heart-breaking, bringing it all back."

It is suspected two more of the Disappeared - Kevin McKee and Seamus Wright - are buried in moorland only a few kilometres from the Oristown bog in an area near Wilkinstown, Co Meath.

A funeral for Mr Megraw will be held in his home town of Belfast next Friday.

The 23-year-old newlywed, who was awaiting the birth of his daughter, was abducted by the IRA in April 1978. 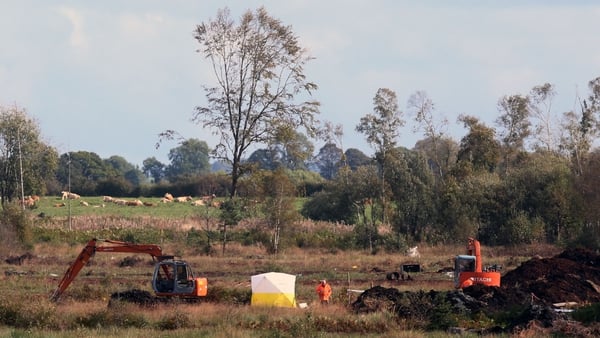