The Irish Farmers’ Association has ended its picketing of 30 meat factories in an ongoing row over beef prices.

The 24-hour protest, which began yesterday afternoon, was called off as planned at 3pm.

The farmers say they were demonstrating at what they claim is the low price being paid for their beef.

A group representing factories, Meat Industry Ireland, has described the protests as counterproductive and said it resulted in losses in the region of €10-15m.

All sides in the dispute are due to meet tomorrow when the beef forum convenes in Dublin.

IFA President Eddie Downey earlier said farmers have had enough and are not prepared to tolerate loss-making prices any longer.

The IFA is angry over a price gap of €350 per animal that has opened up between what meat factories in Ireland and Britain are paying for cattle.

It said that Britain takes over half of Irish beef exports and it cannot understand how price increases in the UK have not been passed on to Irish farmers who have been making very significant losses on their animals since last winter.

The last time a blockade like this happened was in 2000.

On that occasion, the courts imposed very significant fines on the IFA over its action.

Meanwhile, the deputy president of the Irish Creamery Milk Suppliers Association has said it will be March or April of next year before the full effects of the Russian ban on EU dairy produce will be known.

Pat McCormack, who is also chair of its dairy committee, told RTÉ's News At One that the ban has compounded an already difficult situation for dairy farmers.

He said over the past 16 months primary producers have seen milk price drop from in excess of 39 cents a litre to around 30 cents a litre.

This represents a €9,000 drop for the average dairy supplier and is putting pressure on the Irish Dairy Board Index.

Mr McCormack said that the supply chain is out of kilter and until this is corrected around the world, difficulties will continue for primary suppliers.

He added that global demand is increasing by 2.5% per annum, which would normally be welcomed.

However supply is outstripping demand due to ideal climatic conditions which is creating downward pressure on prices. 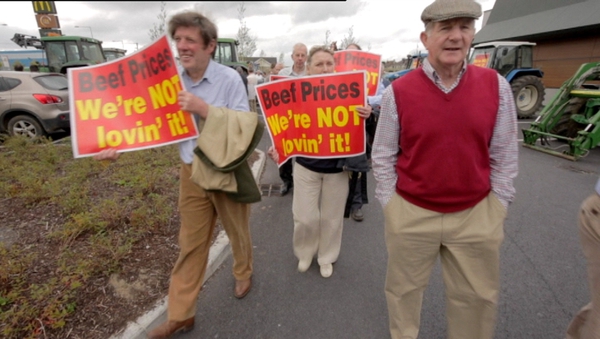