The Irish Farmers’ Association has called for a nationwide 24-hour protest by farmers outside every meat factory in the country from 3pm next Monday to highlight their anger over beef prices.

He said a price gap of €350 per head of cattle has now opened up with the UK.

Mr Downey said farmers have had enough and are not prepared to tolerate loss-making prices any longer.

He challenged the meat factories to explain their failure to pass back recent UK price increases worth over €100 per head of cattle to farmers.

Mr Downey said nobody can explain to farmers why price increases in the UK, which takes more than half Ireland's exports, are not reflected in higher prices to Irish farmers.

The nationwide protest will come two days ahead of the third meeting of the Beef Forum.

The forum was set up by Minister for Agriculture Simon Coveney earlier this year to bring all the players in the beef industry together to increase transparency and address the collapse of trust between farmers and the meat factories. 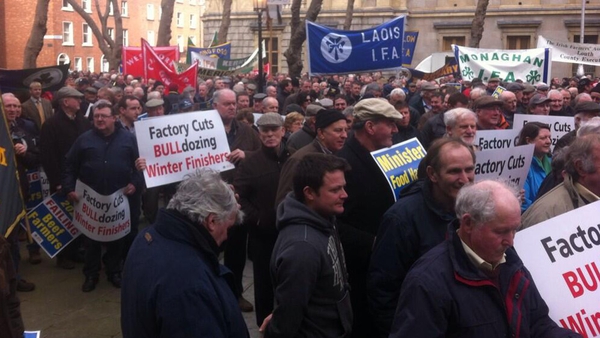