Sinn Féin President Gerry Adams has said party members are not part of any conspiracy to protect child abusers.

Speaking at a party rally in Belfast, Mr Adams referred to criticism of Sinn Féin by Fine Gael and Fianna Fáil in the Dáil during the week.

The criticism was made during Leaders' Question when debate was dominated by the accusation made by Belfast woman Maíria Cahill that she had been raped by a member of the IRA in the 1990s.

Maíria Cahill made the accusations in a BBC Spotlight documentary.

Ms Cahill alleged she was raped by a member of the IRA in 1997 when she was a teenager.

She alleged that she was later interrogated by the IRA about her accusations and she says she was forced to confront her attacker.

Ms Cahill went to the police and a case was brought against the alleged rapist and those said to have been involved in the IRA inquiry.

All charges were subsequently dropped after Ms Cahill withdrew her evidence.

Ms Cahill has said Mr Adams’ claim that he had asked her uncle, Joe Cahill, to urge her to go to the RUC, was not true.

She said she did have a conversation with her uncle in August 2000 following her own meeting with Mr Adams.

Ms Cahill noted that during that meeting Mr Adams did not tell her to go to the RUC.

She said, in fact, it was made clear during that conversation that if she did, the RUC would try to use her to gain information about IRA members.

Ms Cahill said her uncle told her that if he had known about the abuse before her alleged abuser had left the jurisdiction, he would have told her to go to the police.

In the Dáil this week, Mr Adams said there had been no cover-up by him or Sinn Féin.

This morning, Mr Adams rejected what he called "allegations made against myself and named Sinn Féin members by Maíria Cahill."

This assertion came early in his speech at the Sinn Féin rally, but after he said that nobody doubts that Ms Cahill has been through great distress and I have never doubted that she suffered abuse.

Later, in what party officials say is a significant development, Mr Adams called on any former IRA volunteers who may have any information about any allegations of sexual abuse to pass this on to the appropriate authorities.

He was critical of Taoiseach Enda Kenny and Fianna Fáil leader Micheál Martin and accused opponents of using the controversy to to further their narrow political agenda.

Fianna Fáil Leader Micheál Martin has said Mr Adams still has questions to answer as to how his party and the IRA dealt with allegations of sex abuse within their own ranks.

"Mr Adams opted to use his speech this morning to attack his political opponents for continuing to pursue the truth, and demand answers about the manner in which sex abuse allegations were handled by members of the IRA and Sinn Féin.

"This vain attempt to deflect attention from the cover-ups within those organisations, which are now emerging is sickening", he said in a statement.

On Tuesday Northern Ireland's Director of Public Prosecutions Barra McGrory QC announced he is establishing an independent review into three cases linked to the alleged rape.

Mr McGrory said he believed an independent external scrutiny of the processes and procedures in relation to the cases was warranted.

He said all aspects of the prosecutions would be reviewed.

Elsewhere, the Minister for Health Leo Varadkar has said that in any other party people with speak out and suggest that Gerry Adams should step down.

But he said that he thought it was of real concern that members of the party have towed the party line on the issue.

Minister Varadkar said only a few months ago, Gerry Adams was detained in a police station in connection with questions about the murder of Jean McConville.

He said there were now these allegations about the treatment of Ms Cahill, and allegations that child abusers were exported South by the republican movement. 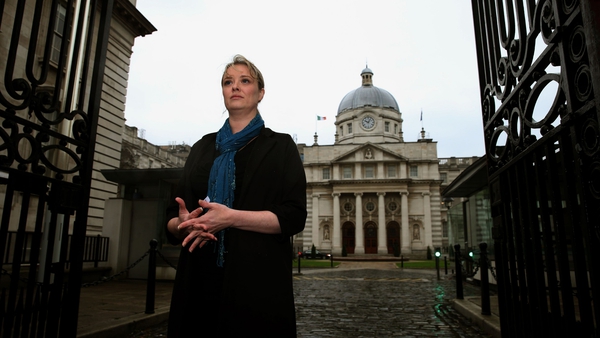