Meath County Council has confirmed that it has written to all Rental Accommodation Scheme tenants advising them that they could face eviction if they do not pay their water charges.

The letter referred to the Tenants' Obligations to the Landlord in the Residential Tenancy Agreement.

It stated: "The tenant must pay all rates relating to the property, including any which are imposed after the date of the agreement.

"As you are a tenant, and therefore the occupier of the property, you will be liable for all water charges with effect from 1st October 2014.

"You are required to confirm your details using the application and apply for your water services allowances. You will then be set up as a customer of Irish Water."

The letter went on to state that if tenants fail to comply with an obligation under the terms of the agreement, then they may be held to be in breach of tenancy.

They could face eviction, but any such notice would have to be in accordance with the Residential Tenancies Act 2004 and would come from the landlord and not Meath County Council.

The Department of Environment has said the letters are reminders from local authorities to tenants accommodated under the RAS scheme of their obligations for payment of utilities, such as gas, electricity, and now water.

A spokesperson said the Department of Environment had not asked the local authorities to send out the reminders.

A spokesperson for Tánaiste Joan Burton said this evening that she will ask officials to take a look at the content of the letters sent to tenants on the RAS scheme.

Earlier, there were angry scenes in the Dáil as Sinn Féin said some local authority tenants had been threatened with eviction if they did not pay.

Sinn Féin Deputy Leader Mary Lou McDonald, who had a copy of a letter from Wicklow County Council, said the Government was presiding over an absolute shambles in terms of the establishment of Irish Water.

Ms McDonald said that thousands of families do not have the money to pay for water.

She asked Tánaiste how she had authorised such a threatening letter and asked her to make it clear to those people that they would not be evicted.

She said water charges have been capped and the amount people on RAS will have to pay has been severely limited.

Irish Water spokesperson Elizabeth Arnett has said that in relation to rented properties, the landlord is not liable to pay for water bills in the event that the occupier/tenant has not registered their details.

Ms Arnett also said the deadline for receipt of application forms may be extended from 31 October.

She said the company will look at the possibility of extending the deadline closer to the time.

She said: "When we get to the end of this process, we will be in a position to provide clarity. I don't want to be misleading, because I don't have the information. We might very well do that. We will look at that closer to the time."

Ms Arnett also said Irish Water accepts there are communication challenges in relation to the volume of phone traffic it is receiving.

Speaking on RTÉ's Drivetime, Ms Arnett said the company has received about 100,000 calls in almost a fortnight and it is trying to deal with all queries.

Ms Arnett said the current average length of a call is just over seven minutes, and that "from time to time" the wait for a call is "absolutely unacceptable".

She said that in relation to rented properties, the landlord is not liable to pay for water bills in the event that the occupier/tenant has not registered their details.

Minister for Public Expenditure and Reform Brendan Howlin has said that neither he nor his department approved the system of bonus payments for Irish Water staff.

Mr Howlin said the Government did not control pay in the commercial semi-State companies.

He said that was a matter for the companies themselves, other than at the top, where the department controls the pay of chief executive officers.

Asked whether he thought Irish Water should rescind the controversial bonus regime, he said it had to look carefully at everything that had happened since the establishment of Irish Water

However, he said it did not want to throw out the good as well as the less good.

Mr Howlin said he believed it could build confidence in a system that provided good clean water.

He said it was wholly unacceptable that there were parts of the country where people had been unable to drink water from the public water supply for 12 years.

The minister said there were new facts emerging from local authorities regarding lead piping, which involved huge issues to be addressed.

A spokesman for Ervia said this evening the performance-related payments were paid to staff in the Bord Gáis group, Bord Gáis energy and Bord Gáis networks.

They do not relate to Irish Water staff, according to the spokesman, who also said the payments for 2014 related to work carried out in 2013.

Earlier, Ms Burton said there was an issue about delays for the public and politicians in trying to contact Irish Water and having to wait on the phone line for a response.

Ms Burton said politicians across Leinster House had raised queries on behalf of constituents about Irish Water and that they would like to be able to get a reasonable response.

She said utility companies are about dealing with customers in an efficient and timely way.

The Government yesterday said it is examining how to reach the 12% of households that will not benefit from Budget measures designed to alleviate the water charges.

Tens of thousands of people protested in Dublin city centre on Saturday against water charges, with the Right2Water Campaign calling for the charges to be scrapped. 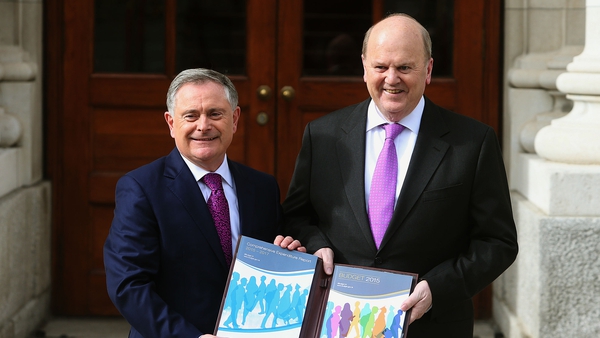