Both Commission President Jean-Claude Juncker and President of the European Parliament Martin Schulz were informed of an escalating legal row between the two.

It threatened to overshadow Mr Hogan’s hearing before the agriculture committee this morning.

According to an EU source, Mr Juncker's office asked Mr Schulz's officials to encourage a meeting between Ireland's commissioner designate and Ms Childers so that the row would not be "played out in public and between legal offices".

Officials in Mr Schulz's cabinet then wrote to Ms Childers offering to "facilitate a meeting".

In the event Mr Hogan wrote to Ms Childers himself seeking a meeting to "explain the facts" and "deal with any misunderstandings".

For now the threat of legal action against Ms Childers remains.

According to extensive correspondence seen by RTÉ News, the conflict between the pair began on 1 September when Ms Childers wrote to 191 MEPs in the centre-left Socialist and Democrats group in the European Parliament, outlining her "concerns" about Mr Hogan's candidacy.

She referred to an alleged intervention by Mr Hogan in 2012 in a dispute over social housing for a traveller family in Kilkenny in 2012.

Following her letter, Mr Hogan's solicitors Mason, Hayes & Curran sent three letters to Ms Childers vehemently disputing her version of events, asking her to "retain" any documents relating to her comments, and taking issue with her written response that she was covered by parliamentary immunity.

In the final letter, sent on 24 September, the law firm said that "due to the serious nature of the allegations raised… our client at this stage has no option but to request that you formally withdraw your allegations within five days, failing which our client may have no option but to initiate legal proceedings to safeguard his reputation".

In response Ms Childers sought advice from the European Parliament legal services, and wrote to the chairman of the parliament's Legal Affairs Committee for support.

Following the letter the issue went to the highest levels in the both the European Parliament and the European Commission.

The day after Mr Hogan's lawyers sent the ultimatum to Ms Childers, his office in Brussels issued a statement defending his threat of legal action.

It read: "As Nessa Childers has actively misrepresented the facts, Phil Hogan has taken the only option open to him to defend his reputation and good name.

"Regrettably due to this misrepresentation he has no option but to deal with this through the legal system.

"He has every right to defend himself.  He will answer questions on this and any other issue that is raised by MEPs at the confirmation hearing next week."

However, the same day the statement was issued, Mr Hogan wrote to Ms Childers seeking a meeting.

The letter read: "I have been hurt by the allegations made against me by certain media outlets and, I am sure you will agree, any reasonable person would seek to defend his reputation.

"In 32 years in public life I have always sought to find good and fair solutions for difficult situations in my constituency and this case was no exception. I have never ever engaged in any political representation that would breach either the spirit or the letter of any equality legislation.

"I never considered taking any legal action or never had to do so in the past to vindicate my good name. I do not wish to proceed along a legal route with you on this subject either, but negative public comments do damage peoples’ reputation.

"Accordingly, I would appreciate an opportunity to explain the facts of the matter and deal with any misunderstanding that you many have in respect of this case. I am available to meet you at our mutual convenience."

During today's hearing at the Agriculture and Rural Affairs Committee, Mr Hogan insisted, in response to a question by Sinn Féin MEP Matt Carthy about the threatened legal action, that Ms Childers did not have parliamentary immunity in relation to the letter she wrote on 1 September.

Following the hearing Ms Childers told RTÉ News:  "I think that he has displayed remarkable political misjudgement. I am protected as are my constituents through me with parliamentary immunity and if any attempt is made to take an MEP to court at a national level in this regard the parliament will defend me and there will be... in the sense that the national, the member State will be confronted about it."

In the event members of the committee voted overwhelmingly to support Mr Hogan's nomination as the next agriculture commissioner.

It is understood Mr Hogan's solicitors did not follow through on the threat of legal action against Ms Childers when the deadline for her to "withdraw her accusations" expired this week.

However, RTÉ News understands that the underlying legal threat has not been withdrawn. 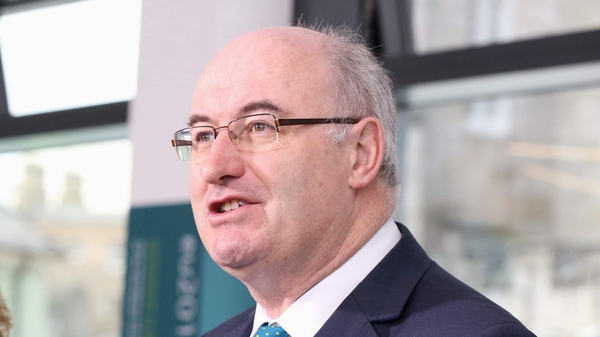