An ancient bog body has been discovered at a midland bog where a similar find was made two years ago.

The remains were found by a Bord na Móna worker at Rossan Bog on the Meath/Westmeath border on Saturday morning.

A Bord na Móna spokesman said: "The remains of a bog body were found in Rossan Bog two miles from Kinnegad on the Meath and Westmeath border."

The spokesman said the employee discovered the remains prior to beginning work and immediately put Bord na Móna's protocol in place.

"The gardai were notified and all work was stopped," he explained.

The scene was preserved and contact was made with the National Museum of Ireland, who sent a team to investigate the find.

They worked at the site until yesterday, when the remains were removed from the bog for further examination.

Further analysis will take place in the National Museum of Ireland's conservation laboratory at Collins Barracks in Dublin.

It is unclear at this stage what the exact condition of the body is or whether it is a man or woman.

This latest discovery was made on the same bog where another bog body was discovered in December 2012. Those headless remains of a man were also found by a Bord na Móna worker.

The exact date of the remains is not known, but they will be established by radiocarbon dating.

According to the National Museum, the remains found in 2012 of a Bronze Age bog body of an adult was radiocarbon dated to between 700BC and 400BC.

It is understood Rossan Bog is located on an ancient territorial boundary, areas often associated with bog finds. 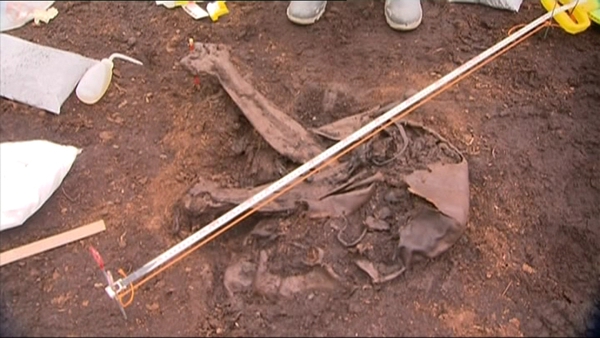