Taoiseach Enda Kenny has said no decisions have been made yet on any of the detail of the Budget.

Speaking on RTÉ's Morning Ireland, Mr Kenny said it would be under discussion over the next few weeks, but that the macro figures were moving in the right direction.

The department has reportedly warned the Government measures required to deliver spending cuts are not achievable and would seriously compromise patient safety.

The comments, reported in the Irish Times, were contained in a confidential submission on the Government's comprehensive review of expenditure.

The review said that hundreds of hospital beds would have to close and opening hours in some emergency departments would have to be reduced if the Government insisted on making spending cuts of several hundred million euro.

Mr Kenny said between now and Budget day a decision about departmental submissions would be made.

The Taoiseach also said that he still is "absolutely" committed to universal health insurance.

Mr Kenny said the he expects Leo Varadkar to be a confident, competent Minister for Health.

He said there is no current deadline to implement medical cards for under-sixes, but he expects Mr Varadkar to have discussions with the health professionals to implement it.

Meanwhile, Fianna Fáil's health spokesperson has said the Government's budgetary process with regard to health has been quite dysfunctional for the past number of years.

Also speaking on Morning Ireland, Billy Kelleher said there was no coherent strategy for health.

He said the Government could not continually take money out of the health service and pretend it could continue to provide the services it had committed to.

Mr Kelleher said the Taoiseach had been exposed for outlining that everything was alright in health.

He said Mr Kenny had said he would take a hands-on approach in the Department of Health.

Mr Kelleher said if this was the Taoiseach's hands-on approach, it went to show that he had not been very capable of managing the Department of Health in conjunction with the minister responsible.

As Minister for Finance Michael Noonan meets his Eurozone counterparts in Milan later today, Mr Kenny said he is hopeful the government will receive permission to rearrange loans which could save €300m-€400m a year.

He also said an application by Ireland to the European Union on the retrospective recapitalisation of banks is still on the table.

Mr Kenny said people want the knowledge and security that the economy is improving and the Government can do this by continuing their plan to strengthen recovery.

However, he said that when the Budget is over "nobody is going to walk down the street and feel like a millionaire". 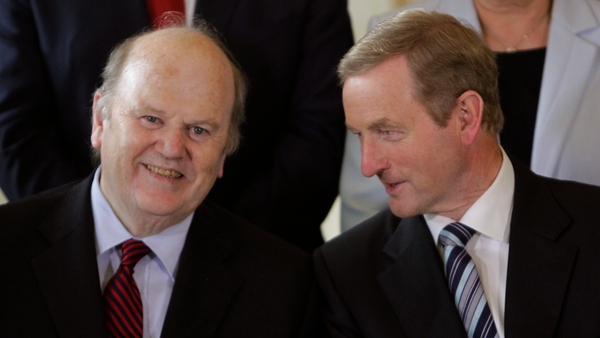