The owner of Greyhound Waste Recycling has warned that the company could face closure with the loss of 400 jobs after striking workers rejected proposals aimed at ending the three-month strike over pay cuts.

Michael Buckley said an "illegal blockade" of the plant was preventing the company from operating.

However, workers said they were prepared to go to jail to defend their right to decent pay.

Earlier today it emerged that the 78 Greyhound strikers had rejected the Labour Relations Commission settlement proposals.

At a news conference, they described the Greyhound offer as "derisory".

Spokesman Ray Reilly urged the company to return to talks with a serious offer, and called on Taoiseach Enda Kenny to intervene in the dispute.

He criticised Greyhound for writing to workers at their houses warning that they could lose their homes if the proposals were not accepted.

The workers' union SIPTU was not represented at the news conference.

Meanwhile, Mr Buckley said the company was disappointed at the ballot result, which had placed the future of the company and its 400 jobs in serious jeopardy.

Tomorrow nine workers will be before the High Court facing possible jail terms for breaches of injunctions granted to Greyhound over alleged illegal picketing.

Greyhound will be seeking damages and costs from those involved in illegal activity.

Workers say they are prepared to go to jail to defend their pay and conditions. 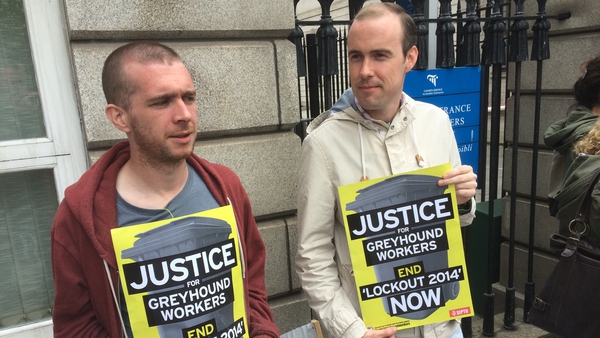