NATO leaders have agreed that Russia should face increased sanctions for its actions in eastern Ukraine.

It said they had agreed on the need for Russia to face increased costs for its actions.

"We call on Russia to end its illegal and self-declared annexation of Crimea," Mr Rasmussen said after a meeting with Mr Poroshenko at the NATO summit.

"We call on Russia to pull back its troops from Ukraine and to stop the flow of arms, fighters and funds to the separatists.

"We call on Russia to step back from confrontation and take the path of peace."

It was up to individual NATO members to decide whether to supply arms to Ukraine, Mr Rasmussen said.

"NATO as an alliance is not involved in delivery of equipment because we do not possess military capabilities," he said.

"These are possessed by individual allies, so such decisions are national decisions and we are not going to interfere with that.”

Meanwhile, President Poroshenko said a ceasefire plan aimed at ending a near five-month conflict in the east of the country would be signed tomorrow.

"Tomorrow in Minsk a document will be signed providing for the gradual introduction of the Ukrainian peace plan," he said.

"It is very important that the first element provides for a ceasefire."

Representatives of Kiev, Moscow, the separatist rebels and the pan-European security group the OSCE are due to meet in the Belarussian capital tomorrow.

However, Russia has several thousand combat troops and hundreds of tanks and armoured vehicles inside Ukraine, a NATO military officer has said.

NATO had previously said that "well over 1,000" Russian troops were operating inside Ukraine, marking a significant escalation of Moscow's military involvement in the country.

"We are still seeing several thousand Russian combat troops on the ground inside Ukraine, equipped with hundreds of tanks and armoured vehicles, so [there is] no substantial change in the disposition of Russian forces inside Ukraine," said the NATO officer, speaking on condition of anonymity.

Russian forces deployed near Ukraine's eastern border are "more lethal" than before and heavily armed with artillery and air defense weaponry, the Pentagon said today.

"The force that we see arrayed on the border is exceptionally capable, probably more capable, more lethal than anything that we've seen up until now," spokesman Colonel Steven Warren told reporters, saying there were more than 10,000 Russian troops in place.

Russia's foreign minister said Ukraine's drive to join NATO risks derailing progress made towards reaching a ceasefire and peace deal to end the conflict in the east of the country.

"Just when approaches are being explored to start resolving concrete problems between Kiev and the rebels, Kiev has called for ending its non-aligned status and beginning joining NATO," Sergei Lavrov was quoted as saying by Russian news agencies.

"This is an obvious attempt to derail efforts to start a dialogue on ensuring national security."

He added that Russia hoped that Kiev and the rebels would take on board a seven-point peace plan suggested by President Vladimir Putin when they meet tomorrow for talks in Minsk. 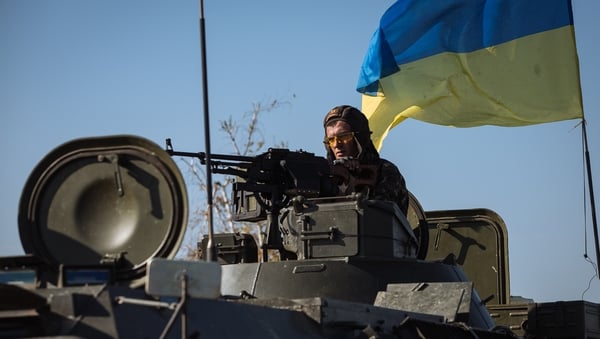