The leaders of the United States and leading European Union countries will discuss Russia's actions in Ukraine, at a meeting with President Petro Poroshenko, on the sidelines of the NATO summit in Wales, a British government source said.

"The Alliance must demonstrate clearly that Russia's actions are unacceptable and that we stand by the people of Ukraine and their right to decide the future of their country," the sources aid on condition of anonymity.

"The meeting will provide leaders with the opportunity to hear President Poroshenko's assessment of the latest situation on the ground and his discussions with President (Vladimir) Putin," the source said.

"It will also send a clear signal of their support for Ukraine's sovereignty and that the onus is on Russia to de-escalate the situation."

Mr Poroshenko spoke by telephone with Mr Putin earlier today and his office said they had agreed on a ceasefire.

Russia, which says it is not involved in the fighting, denied it had made such an agreement and Mr Putin later outlined his own plan for a ceasefire, which Ukraine's prime minister dismissed.

Meanwhile, France has said conditions are "not right" for delivery of the first of two Mistral navy assault ships to Russia.

The country has faced fierce pressure from Washington and other allies to halt the sale of the warships.

Paris agreed in 2011 to build and sell the two advanced helicopter assault ships to Russia, with the first scheduled for delivery in October or November.

France's decision is likely to take the heat off France when NATO leaders meet in Wales tomorrow, for the summit largely focused on the conflict in Ukraine, and growing tensions with Russia.

Earlier, the US said it will send about 200 troops to take part in a US-led annual exercise in Ukraine later this month in a show of solidarity with Kiev.

The presence of the soldiers will mark the first deployment of US ground troops to Ukraine since the conflict with pro-Russia separatists erupted earlier this year. 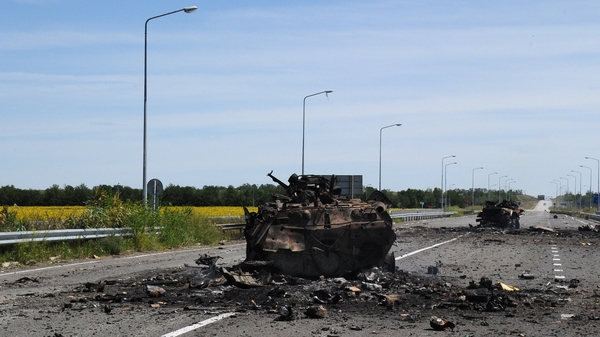