The boy is the fourth civilian in Israel to be killed since the outbreak of conflict on 8 July, and the first Israeli death since an Egyptian-brokered truce broke down earlier this week.

"A short while ago, a mortar hit near a kindergarten in the Sdot Negev regional council, killing an Israeli child," a statement from the army read.

Israeli Prime Minister Benjamin Netanyahu has warned Hamas will pay a 'heavy price' for the killing.

Witnesses said a drone fired two rockets at the two-storey property before an F16 warplane dropped a large bomb.

Witnesses added that it was the home of a family that included members of Hamas.

Emergency services said 40 people from the building and neighbouring buildings were wounded in the strike.

The death toll stands at at least 2,087 Palestinians, three-quarters of them civilians according to the United Nations, and 68 on the Israeli side, nearly all of them soldiers.

Two more were killed in an air raid near neighbouring Deir al-Balah.

The Israeli military said it struck around 20 targets overnight but did not give details.

Iran plans to send aid to the Gaza Strip after Egypt said it would allow the shipment to enter the Palestinian territory, an Iranian diplomatic source said.

The source said a first Iranian Red Crescent shipment of 100 tonnes of medicine and food would be flown "soon" to Cairo.

"The package weighs 100 tonnes and consists of food and medication," IRNA quoted the source as saying. 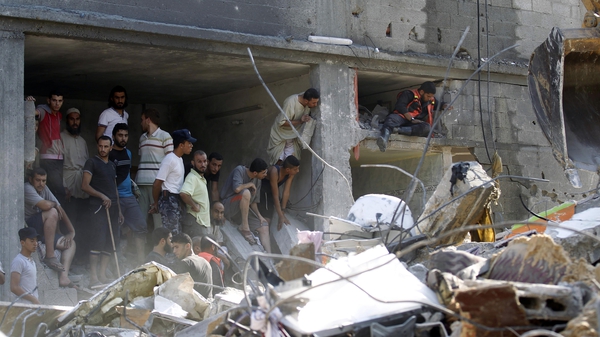 15 people killed in strikes on Gaza