Three senior Hamas commanders and four children were among at least 15 Palestinians killed in Gaza overnight as Israel stepped up air strikes on day 45 of the conflict.

The leaders in the Ezzedine al-Qassam Brigades were among at least seven people killed when Israeli missiles totally destroyed a four-storey home in the southern city of Rafah before dawn, emergency services spokesman Ashraf al-Qudra said.

The Brigades, the military wing of Hamas which holds de facto power in Gaza, identified the three as Mohammed Abu Shamala, Raed al-Atar and Mohammed Barhum.

The deadly raid came 36 hours after the wife and infant son of the Brigades' top military leader, Mohammed Deif, were killed in an Israeli strike on Gaza City late on Tuesday.

Shortly afterwards, another person was killed in a raid on Nusseirat refugee camp in central Gaza.

During the morning, two strikes targeted groups of people in the street in the northern town of Beit Lahiya and in Gaza City, killing another seven Palestinians, four of them children, Qudra said.

The strike in Beit Lahiya killed a man and a 13-year-old boy, while five people, including three children died in Gaza City, he said, without giving their ages.

As well as the 15 killed in air strikes, another person in Nusseirat camp died of injuries sustained earlier in the conflict, Qudra said.

The latest deaths bring to 2,065 the number of Palestinians who have been killed during six weeks of fighting between Israel and Hamas.

The UN says around three-quarters of the victims in Gaza are civilians. Israel says 64 of its soldiers and three civilians have been killed.

Their deaths provoked a spiral of violence that led to the Israel-Gaza conflict, the first acknowledgement of the movement's involvement.

Hamas, which controls Gaza, has up to now refused to confirm or deny Israeli accusations that it masterminded the abduction and killing of the three young men, one of them a joint US-Israeli citizen, in Hebron.

"There was much speculation about this operation, some said it was a conspiracy," Saleh al-Arouri told delegates at the International Union of Islamic Scholars in Istanbul yesterday, according to a recording of the meeting posted online by organisers.

"The popular will was exercised throughout our occupied land, and culminated in the heroic operation by the Qassam Brigades in imprisoning the three settlers in Hebron," he said, referring to Hamas's armed wing.

"This was an operation from your brothers in Qassam undertaken to aid their brothers on hunger strike in (Israeli) prisons," he added.

Jewish seminary students Eyal Yifrach, 19, and Gilad Shaerand Naftali Fraenkel, both 16, were abducted while hitchhiking in the Israeli occupied West Bank on 12 June and killed.

Israel promptly accused Hamas, which is based in Gaza but has a presence in the West Bank, of masterminding the attack and began a crackdown on the group in which over 1,000 Palestinians were arrested.

Tensions already ran deep in the West Bank after weeks of a mass hunger strike by Palestinian prisoners in Israeli jails.

Hamas leader Khaled Meshaal, who is in exile in Qatar, denied knowledge of the abduction but praised its perpetrators.

Nearly three weeks after the kidnappings, 16-year-old Mohammed Abu Khudair, a Palestinian living in East Jerusalem, was abducted, beaten and burned to death by, prosecutors said, a group of Jewish extremists.

Two Palestinian suspects Israel has named as the kidnappers of the three seminary students remain at large.

Israel said a third suspect arrested by its security forces admitted under interrogation to organising the kidnapping with funds from Hamas in Gaza.

The armed wing of Hamas has executed three Palestinians and arrested seven others for allegedly collaborating with Israel during the Gaza war, a website close to the movement reported.

The Majd website quoted a senior security official in Gaza as saying seven people had been arrested on suspicion of scoping out targets for Israel and that three others had been shot dead.

No date was given for the executions or the arrests.

The same website reported on 6 August that "a number" of Palestinian collaborators had been killed, again without giving a date.

In May, Hamas announced the execution of two men accused of being collaborators, saying they had been executed in accordance with the law.

In principle, Palestinian president Mahmoud Abbas, who heads the Western-backed Palestinian Authority, is supposed to approve all executions.

Hamas has controlled Gaza since winning elections in the enclave in 2007.

Although it handed the reins of power to a Ramallah-based administration in early June, it remains the de facto power in Gaza.

Mr Abbas is based in Ramallah in the West Bank. 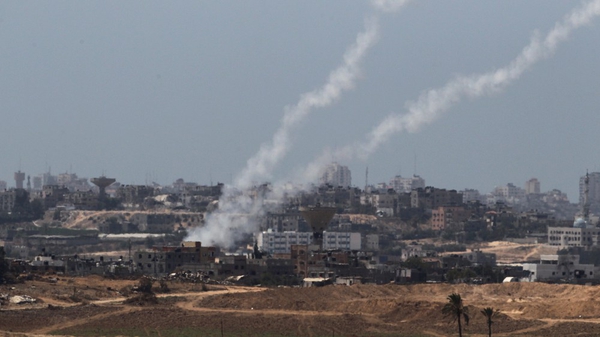