The armed wing of Hamas has declared an end to its participation in Egyptian-brokered efforts for a durable ceasefire with Israel, as violence escalated after the collapse of a 24-hour truce.

"We are calling on the Palestinian delegation to withdraw immediately from Cairo and not to return," said a spokesman for the Ezzedine al-Qassam Brigades in comments broadcast on the movement's Al-Aqsa TV channel.

The spokesman also warned foreign airlines against flying into Tel Aviv, threatening to step up its six-week conflict with Israel.

"We are warning international airlines and press them to stop flying into Ben Gurion airport from 6am (4am Irish time) Thursday," he said.

Another woman and a teenager were also killed after an Israeli air strike levelled a six-storey house in Gaza City.

"This policy of 'quiet for quiet' effectively means that Hamas is the initiator and the one deciding when, where and how to shoot at Israeli citizens," he wrote on his Facebook page.

"Hamas is controlling the height of the flames and chooses when to disturb the rhythm of life for people in Israel," he said, indicating the rocket fire from Gaza was unlikely to stop.

"When we speak seriously about Israelis' security we must understand that there is no other option other than decisive action with one meaning - toppling Hamas."

Mr Lieberman is one of the most hard-line members of Israel's inner security cabinet, which was meeting this afternoon to discuss the situation, media reports said.

Palestinian health authorities said 20 people have died and at least 120 wounded by Israeli strikes across Gaza.

Among those killed were three women and nine children.

Israeli army figures show that since the latest truce collapsed, Gaza militants have fired 137 rockets over the border, of which 94 hit southern and central Israel, while another 24 were shot down.

In the same period, the army hit 92 targets across Gaza, a spokeswoman said.

The latest violence has raised the overall death toll in Gaza to around 2,038 with more than 10,300 people wounded.

On the Israeli side, 67 people have died - 64 soldiers and three civilians. 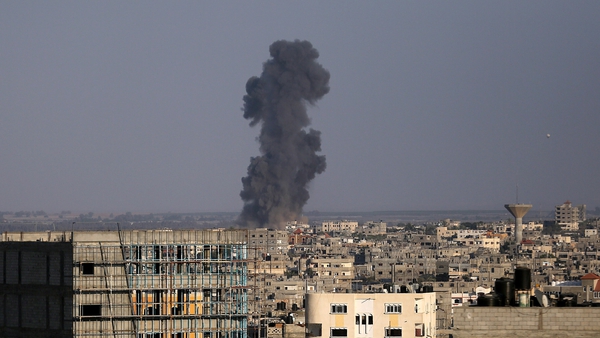