A Nigerian woman sent to a Singapore hospital isolation unit does not have Ebola as initially suspected, the Straits Times has reported.

Philip Choo, chief executive of the government hospital where the woman was sent, said it was a false alarm and the woman had been discharged, the newspaper said.

"We saw a patient with a history from Nigeria," Mr Choo said, adding that her detailed history revealed "no contact with any suspect or confirmed patients".

The woman, in her 50s, was believed to have flown into Singapore recently and arrived at a hospital emergency department with a fever, the newspaper said.

The world's worst outbreak of Ebola has claimed the lives of 1,069 people.

There are 1,975 probable and suspected cases, the vast majority in Guinea, Liberia and Sierra Leone, according to the World Health Organisation.

There have been no confirmed cases in Asia.

Meanwhile, the number of confirmed Ebola cases in Nigeria has risen by one to 11, Health Minister Onyebuchi Chukwu said this morning.

The figure includes three deaths and eight people who are being treated at a special isolation unit set up in Lagos, a megacity of more than 20 million people, the minister told reporters.

Nigeria has not recorded a case outside Lagos but there were fears that a nurse who was infected in the city may have carried the virus to the key eastern city of Enugu.

The nurse was among those who treated Liberian government employee Patrick Sawyer, who brought Ebola to Lagos on 20 July.

He died in hospital on 25 July.

After contracting the virus, the nurse travelled to Enugu, where she began showing symptoms before being transported back to Lagos for treatment.

Officials on Wednesday said 21 people in Enugu who had contact with the nurse were being monitored.

But Mr Chukwu said that 15 of those people had been cleared, with only six in Enugu still being watched.

The development is a positive one for health workers in Africa's most populous country, as a spread of the outbreak beyond Lagos would put significant strain on Nigeria's weak healthcare system.

The number of people under surveillance for possible infection in Lagos was reduced from 177 to 169 overnight, Mr Chukwu added.

The virus has a maximum incubation of 21 days, so anyone who does not become symptomatic within three weeks of exposure is thought to be safe. 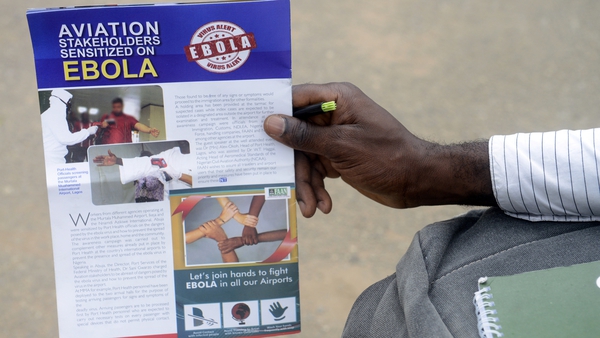