A three day truce in Gaza appears to be holding as talks between Israeli and Palestinian representatives take place in Cairo to try to end the conflict.

The indirect talks are being mediated by Egypt and began a day after the two sides agreed to begin the ceasefire.

The Israeli military said one rocket was launched at the Tel Aviv area before the ceasefire went into effect at 10pm last night and may have landed in the sea.

Hamas said it fired the missile.

A month of war has killed 1,910 Palestinians and 67 Israelis while devastating wide tracts of densely populated Gaza.

Gaza hospital officials say the Palestinian death toll has been mainly civilian since the start of Israel's military campaign to quell Gaza rocket fire on 8 July.

Israel has lost 64 soldiers and three civilians, while heavy losses among civilians and the destruction of thousands of homes in Gaza have drawn international condemnation.

The Israeli delegation to the Cairo talks had flown home on Friday when the sides failed to reach a deal to prolong a previous three-day truce.

A Hamas official said yesterday Palestinian factions had accepted Egypt's call and that the Cairo talks would continue.

Hamas spokesman Sami Abu Zuhri said that these new negotiations would be "the last chance" for a deal.

Hamas has demanded an end to Israeli and Egyptian blockades of Gaza and the opening of a seaport in the enclave - a project Israel says should be dealt with only in any future talks on a permanent peace deal with the Palestinians.

Israeli Strategic Affairs Minister Yuval Steinitz said in a radio interview this morning that disarming Gaza militants was crucial to sustain a long-term truce and he hoped this could be done by diplomacy rather than force.

In Gaza, shops began to open and traffic was normal as displaced families returned to the homes they had been forced to abandon during Israeli attacks, expressing hope that this truce would last after a series of failed ceasefires.

The new three-day ceasefire won praise from United Nations Secretary General Ban Ki-moon, who hoped it might lead to a durable ceasefire.

The violence of the past three days has been less intense than at the war's outset, with reduced firing on both sides, raising hope the conflict could be nearing its end.

Meanwhile, George Clooney's fiancee, lawyer Amal Alamuddin, has been chosen by the United Nations Human Rights Council to investigate allegations of violations of the rules of war in Gaza.

Beirut-born Alamuddin, a barrister specialising in international law, human rights, extradition and criminal law, has been a legal adviser to the UN in a number of its previous investigations.

The London-based lawyer will join Doudou Diene of Senegal and William Schabas of Canada to serve as members on the international commission, the UN said. 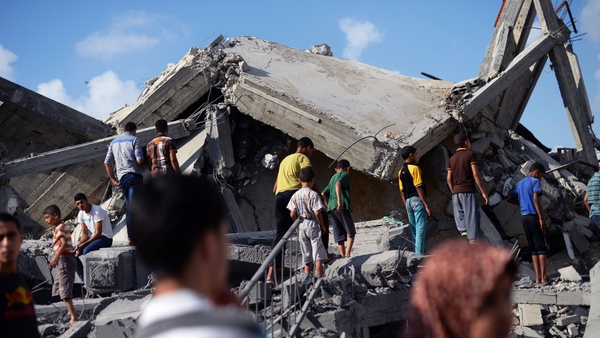