A clinical trial of an experimental vaccine against the deadly Ebola virus is set to start shortly, according to British pharmaceutical company GlaxoSmithKline.

The company is co-developing the product with US scientists.

The world's worst outbreak of Ebola has killed nearly 1,000 people in West Africa.

The disease could continue spreading for months, increasing pressure on researchers to accelerate their work on new medical interventions.

There is no proven cure or vaccine to prevent infection with Ebola.

The scale of the current outbreak has prompted the World Health Organisation to declare it an international health emergency.

It it is now due to enter initial Phase I testing in humans, pending approval from the US Food and Drug Administration.

A company spokeswoman said that the trial should get under way "later this year".

GSK's partner the US National Institute of Allergy and Infectious Diseases (NIAID) said in a statement on its website it would start "as early as Autumn 2014".

Even if it is fast-tracked, however, and emergency procedures are put in place, the new vaccine could not be ready for widespread deployment before 2015 - even assuming it works as well as hoped.

The investigational vaccine is based on a chimpanzee adenovirus into which two Ebola genes have been inserted.

This means it contains no infectious Ebola virus material.

Adenoviruses are best known for causing the common cold.

Once the vaccine enters a cell and delivers its genetic payload, the two gene inserts produce a protein that generates an immune response in the body - but the adenovirus carrying the genes does not replicate further.

The NIAID - part of the National Institutes of Health -is also supporting work on other early-stage Ebola vaccines.

Johnson & Johnson's Crucell unit says that it should enter Phase I clinical testing in late 2015 or early 2016.

The Crucell vaccine is designed to give additional protection against Marburg, another severe and highly fatal disease caused by a virus from the same family as Ebola. 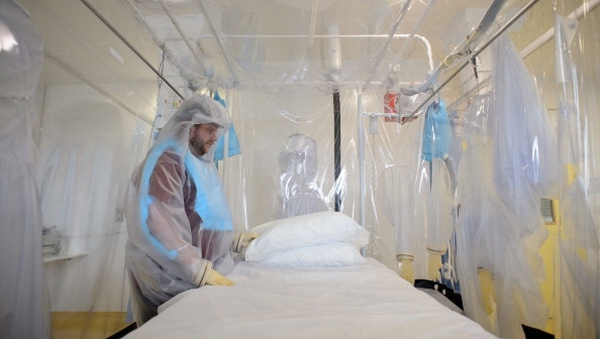 Nigeria calls for volunteers to fight Ebola virus in Lagos