The UN Security Council has condemned recent attacks by Islamic State militants in Iraq and called for international support for the country after the 15-member body held an emergency meeting on the situation.

"The members of the Security Council call on the international community to support the government and people of Iraq and to do all it can to help alleviate the suffering of the population affected by the current conflict in Iraq," said Britain's UN Ambassador Mark Lyall Grant, president of the council for August.

This is the third council statement related to the offensive by Islamic State, which is considered more extreme than al Qaeda.

Meanwhile, President Barack Obama is considering ordering US air strikes against Sunni extremists in northern Iraq and humanitarian food drops to beleaguered civilians, according to reports.

"There could be a humanitarian catastrophe there," an official told the New York Times, warning that a decision on military action was expected "imminently - this could be a fast-moving train".

A Pentagon spokesman has said press reports that US has conducted air strikes in Iraq are "completely false".

The White House said the US government and military were supporting Iraqi and Kurdish forces to protect people trapped by Islamic State fighters.

Spokesman Josh Earnest said any US military action would be "very limited in scope" and tied to Iraqi political reforms, adding: "There are no American military solutions to the problems in Iraq."

Mr Obama came to office determined to end US military involvement in Iraq and in his first term oversaw the withdrawal of the huge ground force deployed there since the 2003 American invasion.

But recent rapid gains by the Islamic State, a successor group to al-Qaeda's former Iraqi and Syrian operations, compelled him to send military advisers back to Baghdad evaluate the situation.

The group, along with allied Sunni factions, is at war with Iraqi Prime Minister Nouri al-Maliki's mainly Shia government forces and with the peshmerga forces of the Kurdish autonomous region of the country.

In late June, it proclaimed a "caliphate" straddling rebel-held areas of Syria and Iraq and seized the major city of Mosul.

In recent days, it has seized towns formerly populated by Christians and Yazidis.

Islamic State militants moved in overnight after the withdrawal of Kurdish peshmerga troops, who are stretched thin across several fronts in Iraq, residents said.

"I now know that the towns of Qaraqosh, Tal Kayf, Bartella and Karamlesh have been emptied of their original population and are now under the control of the militants," Joseph Thomas, the Chaldean archbishop of Kirkuk and Sulaimaniyah, told AFP.

Qaraqosh is an entirely Christian town, which lies between Mosul, the jihadists' main hub in Iraq, and Arbil, the Kurdish region's capital.

"It's a catastrophe, a tragic situation. We call on the UN Security Council to immediately intervene. Tens of thousands of terrified people are being displaced as we speak, it cannot be described," the archbishop said.

Tal Kayf, the home of a significant Christian community as well as members of the Shabak Shia minority, also emptied overnight.

"Tal Kayf is now in the hands of the Islamic State. They faced no resistance and rolled in just after midnight," said Boutros Sargon, a resident who fled the town and was reached by phone in Arbil.

Meanwhile, several thousand Yazidis, members of an ancient pre-Muslim religious minority, are stranded on high ground after being driven out of their home town of Sinjar by IS fighters.

US press reports said that Mr Obama could decide to mount a humanitarian operation to save displaced or besieged civilians, or launch military strikes to halt the IS advance.

UN Secretary-General Ban Ki-moon has said he was "deeply appalled" by reports of attacks by Islamic State militants in Kirkuk and Qaraqosh in Iraq and called on the international community to help the country's government.

In a statement Mr Ban called "on the international community, especially those with the influence and resources to positively impact the situation, to support the Government and people of Iraq and to do all it can to help alleviate the suffering of the population affected by the current conflict in Iraq." 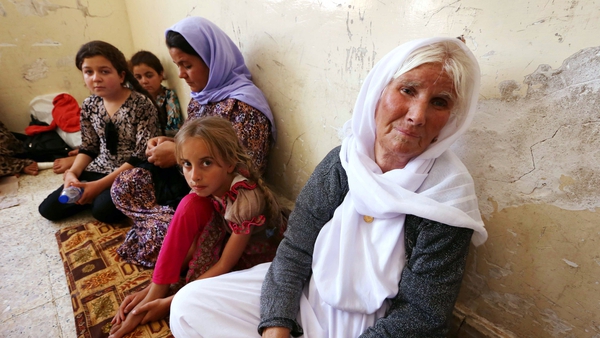