However, Italy's civil protection agency has said it was too early to say whether they belonged to the last missing victim of the 2012 disaster.

"Divers found bone fragments during their search inside the Concordia" for the body of missing Indian waiter Russel Rebello, a spokesman said.

Italian media reports said the divers had discovered skull fragments, a detail the civil protection agency would neither deny nor confirm.

"Analysis of the remains will begin soon and their results should be known in the next few days," the agency said in a statement.

Mr Rebello's relatives have been informed, as have relatives of a female Italian victim "because it cannot be ruled out that the remains belong to her," it said.

The bodies of 30 of the 32 people who died in the shipwreck were recovered soon after the liner sank.

However, passenger Maria Grazia Trecarichi's remains were officially recovered and identified only last October and it was not clear whether all her remains had been found.

The vast Concordia wreck was refloated and towed away to a scrapyard in Genoa last month in the biggest operation of its kind.

Divers were carrying out a search in previously inaccessible areas of the ship, which is twice the size of the Titanic, before a 22-month project begins to dismantle it. 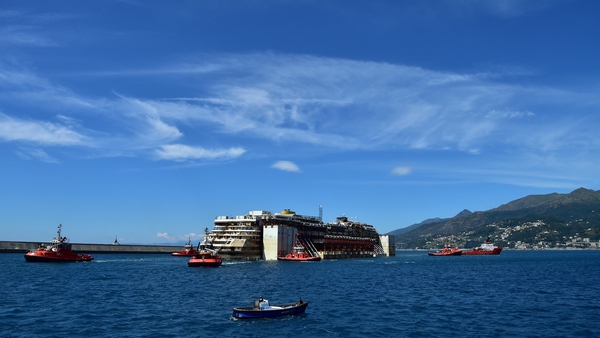 Costa Concordia arrives in Genoa to be scrapped