The wrecked Costa Concordia cruise liner was towed to the northern Italian city of Genoa to be broken up for scrap today.

It comes two-and-a-half years after the ship ran aground and sank with the loss of 32 lives.

After a four-day journey from the Tuscan island of Giglio, where it sank on 13 January 2012, the 114,500-tonne hulk was manoeuvred into place and secured.

It was the conclusion of one of the largest and most complex maritime salvages ever attempted.

Italian Prime Minister Matteo Renzi flew to Genoa to hail the completion of the operation.

It restored some pride to Italy after a disaster that was widely interpreted as a national humiliation as well as a human tragedy.

"This isn't a day for showing off or creating a spectacle, but it's a mark of gratitude from the prime minister for getting something done which everyone said would be impossible," Mr Renzi told reporters on the dock.

He saluted the work of the salvage engineers from Italy and around the world.

"We have had a terrible page to turn, but Italy isn't a country destined for the scrap heap," he said.

In contrast to the night when the Concordia ran aground and capsized during a display sometimes performed by cruise ships known as a "salute", the salvage operation has been a resounding technical success.

After hours of preparation, dockworkers fixed the wreck in place in the industrial port of Voltri, just outside the main harbour in Genoa.

It will be dismantled by a consortium led by Italian engineering group Saipem and Genoa-based San Giorgio del Porto in an operation expected to cost €100m and take up to two years.

The overall salvage effort is expected to cost Carnival Corp, owner of the ship's operator, Costa Cruises and its insurers more than €1.5bn.

The Costa Concordia, a huge floating hotel as long as three football pitches laid end to end, with 13 passenger decks, was carrying 4,000 passengers and crew when it went down shortly after the start of a Mediterranean cruise.

Its captain, Francesco Schettino, is on trial for causing the shipwreck, which ended in a chaotic night time evacuation during which 32 people died.

The body of one crew member lost during the accident has still not been recovered.

Work has proceeded with very few serious hitches since the wreck was brought upright from its position on the rocks last September.

That was a multinational effort led by US maritime recovery specialist Titan Salvage which involved as many as 200 crew working on the site at any one time.

After spending the winter months secured in place, the liner was refloated last week and began the voyage to Genoa, which beat rival bids from ports in Italy and Turkey to secure the demolition contract.

Supported by huge "sponsons", or buoyancy tanks, on either side, the wreck has been towed by two tugboats accompanied by a convoy of auxiliary vessels, travelling at an average speed of around two nautical miles an hour.

Helped by calm seas, there were no major alarms during the voyage.

Environment Minister Gian Luca Galletti said concerns in France about possible pollution damage during the transfer, which took the Concordia near Corsica, had proved unfounded.

"There hasn't been any problem at all. They should have a bit more confidence in Italians," he said. 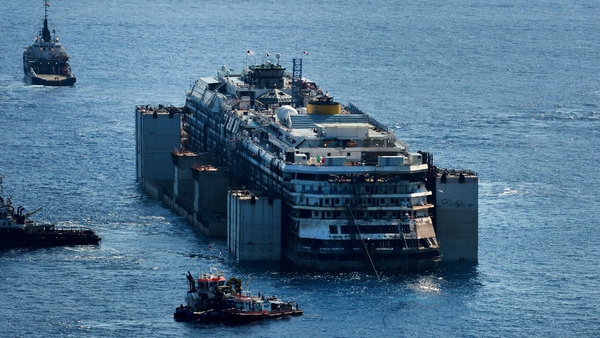