The rusty hulk of the Costa Concordia cruise liner has begun its journey to the scrapyard after a two-year salvage operation off the Italian island where it capsized two years ago, killing 32 people.

Boats sounded horns and church bells rang as a tug boat slowly pulled the wreck of the liner away from the island of Giglio, accompanied by a convoy of 14 vessels.

Salvage workers gathered in bars at the port to celebrate after completing one of the largest maritime salvage operations in history.

The 114,500-tonne wreck is due to arrive at a port near Genoa in northern Italy on Sunday, before being broken up for scrap.

The once-gleaming white luxury liner, which was around two-and-a-half times the size of the Titanic, sank off the holiday island of Giglio in January 2012 after sailing too close to shore.

Over the past week, salvagers have slowly lifted the ship from underwater platforms by pumping air into 30 large metal boxes, or sponsons, attached to the hull.

Franco Porcellachia, engineer in charge of the salvage, said yesterday that his team had done everything in its power to make sure the massive ship was structurally sound for the journey.

"When we are in sight of the port of Genoa, we can declare victory," said Franco Gabrielli, the head of Italy's civil protection service.

The whole salvage operation is set to cost the ship's owners Costa Crociere, a unit of Carnival Corp, more than €1.5bn, its chief executive said earlier this month. 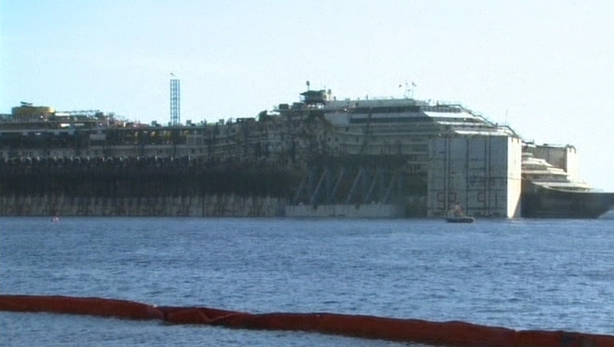 Bad weather delayed the process by two days, and salvage master Nick Sloane said this morning that "forecasts are good" and "today is a big day for Giglio".

The wreck's departure removes both the physical remains, which prompted worries about pollution on the picturesque Tuscan coastline, and the visual spectre of a chaotic evacuation of crew and passengers, some of whom jumped ship and swam ashore.

"At the beginning, this ship was a place where I saw tragedy strike, I saw death," said Italian Luciano Castro, a survivor of the tragedy.

"Over time though, I thought this ship is also a place where a miracle occurred. It is true that unfortunately 32 people died but also 4,000 people were saved."

The ship's captain, Francesco Schettino, is fighting charges of manslaughter, causing a shipwreck as he tried to "salute" the port, and abandoning ship.

During court proceedings earlier this year, the cruise company's crisis coordinator said Mr Schettino tried to persuade him to pretend an electrical blackout had caused the wreck.

One person who was on the ship when it sank is still missing.

Salvage organisers have said the search for the body will continue once the Concordia has left Giglio.

The ship was righted in September in a complex "parbuckling" operation in which the huge hulk was slowly lifted off the rocks in an operation that took 19 hours and drew media coverage from around the world. 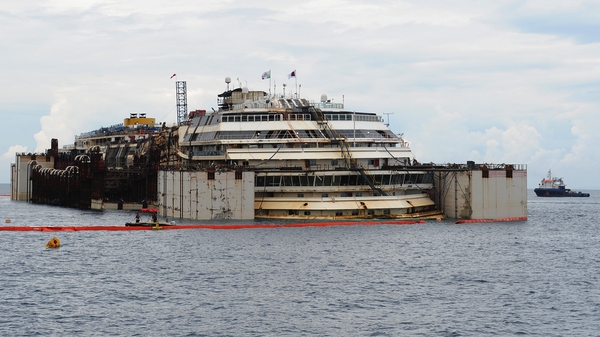 Costa Concordia refloated to be towed away