The World Health Organisation is to convene a panel of medical ethics experts to explore the use of experimental treatment for Ebola as the death toll in West Africa rises to 932.

The WHO today began a two-day emergency meeting on the Ebola epidemic, with the UN agency deciding whether to declare it an international crisis.

The closed-door session is tasked with ruling whether the outbreak constitutes what is known as a "public health emergency of international concern".

To date, the WHO has not issued global-level recommendations such as travel and trade restrictions related to the outbreak, which began in Guinea and has spread to Liberia, Sierra Leone and Nigeria.

Since breaking out earlier this year, the Ebola epidemic in West Africa has claimed hundreds of lives and infected more than 1,600 people.

Most of the deaths have been in Guinea, but the scale of the epidemic has slowed there, while intensifying in neighbouring Liberia and Sierra Leone.

Nigeria today confirmed new cases of Ebola in Lagos and a second death from the virus, bringing the total number of infections in sub-Saharan Africa's largest city to seven.

In Saudi Arabia, a man suspected of contracting Ebola during a recent business trip to Sierra Leone died early today in Jeddah, the Health Ministry said.

Ebola, a form of haemorrhagic fever, for which there is no vaccine, causes severe muscular pain, fever, headaches and, in the worst cases, unstoppable bleeding.

It is believed to be carried by animals hunted for meat, and spreads among humans via bodily fluids.

It has killed around two-thirds of those it has infected since its emergence in 1976, with two outbreaks registering fatality rates approaching 90%.

The death rate in the current outbreak is around 55%.

Ebola was first discovered in 1976 in what is now the Democratic Republic of Congo, and is named after a river there.

A patient who was admitted to a New York hospital this week with fever and gastrointestinal symptoms similar to Ebola has tested negative for the virus, the facility said this evening.

Meanwhile, US health regulators have authorised the use of an Ebola diagnostic test developed by the Pentagon to help contain the outbreak.

The diagnostic test was authorised for use abroad on military personnel, aid workers and emergency responders in laboratories designated by the Department of Defence to respond to the Ebola outbreak, the US Food and Drug Administration said.

The test, called DoD EZ1 Real-time RT-PCR Assay, is designed for use on individuals who have symptoms of Ebola infection, who are at risk for exposure or who may have been exposed.

It can take as long as 21 days for symptoms to appear after infections.

The agency can evoke emergency authorisation for a medical product it has not approved when there are no adequate alternatives.

An Irish public health doctor who is treating Ebola patients in Sierra Leone has said more help is needed from the WHO to try to contain the outbreak.

Dr Gabriel Fitzpatrick is a volunteer with Médecins Sans Frontières in Kaihlun, which is the epicentre of the outbreak in Sierra Leone.

Speaking on RTÉ's News at One, Dr Fitzpatrick said MSF does not have the capacity to treat the number of people who are infected with the virus.

He said: "This would be a difficult outbreak for any government in West Africa to deal with, simply because of the scale of the cases.

"Sierra Leone now has the largest number of cases of any country in West Africa.

"The government of Sierra Leone are doing their best, but they don't have the capacity to deal with this outbreak." 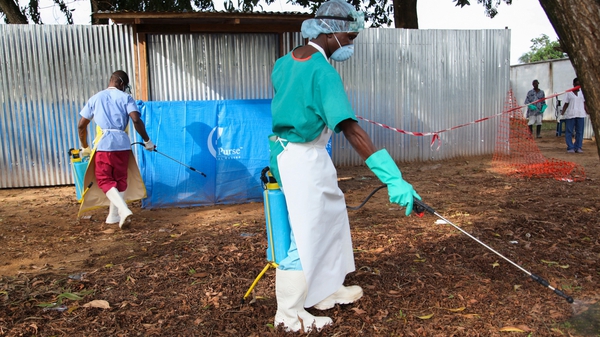